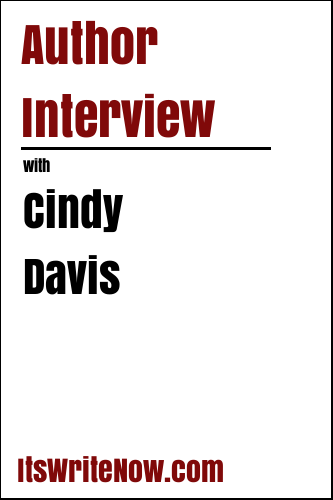 When a fishing trip hooks more than a few trout, ER nurse Angie Deacon and her husband find themselves unexpected suspects in a murder investigation. As police storm the boat, Angie comforts the distraught widow, Valerie, who quickly becomes the chief suspect.  Will Angie regret her decision to aid Valerie once she learns the woman’s dark secret?

What secrets are lurking in Valerie’s past? What secrets will be uncovered during the murder investigation? To find out, Cindy Davis, the coordinator of all of these secrets and I will chat about what awaits in ‘A Little Murder’. Cindy, let’s go back to the beginning, how did this tale start?

It started from a character. Angie Deacon had been on my mind and I needed to find out where she wanted to go.

How did you find out where she wanted to go? Were some of the things she did, or things that she wanted to do influenced from your own life?

Angie’s upbringing was similar to mine. Both our mothers disliked us.

Did the similar upbringing mean that the characters Angie interacts with were similar to people from your upbringing, or they develop differently?

The characters were developed to compliment Angie.

What did you learn by building this world and plot around Angie?

It’s hard to keep the variety of characters under control for 100,00 words.

Do you find writing and controlling those characters energising or exhausting?

Both. If the characters are behaving themselves, then it is easy.

Are you always thinking about how to keep those characters behaving as you write, or are you focusing on something else?

Since I write mystery, I have to have the plot in mind.

As you’ve kept writing and pulling that plot into shape, how do you feel that your writing has changed?

I can more easily adapt to the voices now.

After working through all of the twists and turns to create a mystery and adapting to whatever your characters have thrown at you, what do you hope readers take from A Little Murder?

That I kill people for a living.

No-one is safe in your fictional world! Are you returning to murder in your next book, or are you writing something a little different?

My spiritual memoir. A total change from my usual fiction writing.

Wow, that’s just about in the opposite direction to murder mysteries. How do you reconcile these differences in your writing so that you’re able to encourage readers to pick your work up?

I have been using Amazon promotions as well as some different promo sites like yours to get my name recognized.

Promotion is a great way to connect with readers! But I know that doing promotion after promotion can be a little tiring, so let’s spin our focus towards something fun, our quick fire question round!   Let’s start with if you invented a monster what would it look like and what would you call it?

Hold on!!! I will have to look under the bed. Think his name is dust bunny.

You gotta love a dust bunny! If money doesn’t grow on trees then why do banks have branches?

Because in the offseason plots grow on them.

A great place to grow plants! Can you cry underwater?

I don’t go underwater, it gets up my nose.

Fair enough, you don’t want to upset a happy nose. If space is a vacuum, who changes the bags?

Mine doesn’t have a bag.

Good, I’m don’t think you really want to change a bag in a space vacuum. Why is a square meal served on round plates?

Because it has less calories.

*Laughs* They really should market it that way! We’ve had such fun with marketing and murder today that I’d love to keep chatting, but we both have lots of things to write so we’ll have to end up here. Cindy, thanks so much for sharing a little insight into the A Little Murder with us!

Excited to read the book we discussed today? Find it here on Amazon: ‘A Little Murder ( ASIN: B00F4NIW9Y )‘.

Want to find out more about Cindy Davis? Connect here!