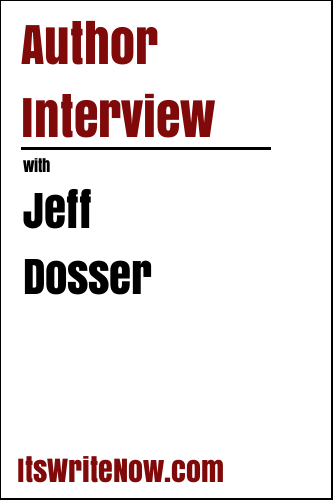 Following the brutal murder of his wife and the traumatic backlash to his son, Detective Mark Boyd has retired from the Alsuma Police Department and taken up the tranquil country life outside picturesque Button Creek, Oklahoma. But Mark’s plans to heal his son and rebuild their relationship are shattered when their new life is destroyed by a pack of violent marauders.

Mark’s call to authorities falls on deaf ears and his only assistance comes in the form of alluring telephone lineman, Heather James. With Heather’s help, Mark makes plans to uncover those responsible but soon learns the peaceful town of Button Creek is not what it seems. Its citizens are prisoner to a horrible secret, a secret which could steal his son and destroy their chance for a fresh start.

Will Mark and his son be able to live their new life, or will they continue to be haunted by the past? Jeff Dosser, the owner of the pen behind ‘Neverland’ has kindly sat down with me today to explore what’s in store for Mark and this country town. Mark, what inspired you to write a novel about a man who settles himself and his son in a secret-filled small country town?

Neverland’s influence can be traced to a move of my own into the country. Long walks in the woods can certainly awaken the imagination as to what might be lurking out there.

So a lot of this book was really from your own experiences?

Oh, absolutely. I spent several years as a cop, so I ‘get’ the way they think. And I’ve always loved rural America. Having lived in and around rural Oklahoma most of my life, it was easy to put myself into Mark Boyd’s shoes.

How did Mark, and the other characters develop from your own experiences and the story that was being crafted?

In searching for characters, it’s always easiest to look for the familiar. With a son the same age as the Mark Boyd’s, I was drawn to presenting him as a character in trouble. Imagining the trauma a child would suffer at witnessing their mother’s murder, became a point of serious consideration in building his persona.

What became the most important thing you wanted to share in your work after taking such intense emotions and experiences of your characters into account?

Never shut yourself off to love. Even if all appears lost, love is there to help if you’re willing to look.

Was that the central idea that you also learned yourself? Or did you learn something else that impacted you?

Chapter hooks. In my first book, Cicada Summer, I really missed the boat on chapter hooks. I did a much better job this time around.

What writing project(s) are you currently working on?

I’m working on the first chapters of a steampunk sci-fi set on the terraformed moon. I’ll soon begin final edits on a zombie apocalypse novel, tentatively named, Shattered. It’s set in a world where civilization didn’t totally collapse, and a man who’s been separated from his family only to discover they are still alive.

Oh, that’s a great lead-in. I want to get my hands on that! Do you find it energising to delve into complex worlds like that civilisation, or the rural towns, or does it get a bit overwhelming when there’s so much going on?

Once you’ve cleared several hours and are in the zone, what’s at the top of your mind as you work?

I try to switch to the mind of whichever character is currently ‘point of view’ for the reader. When chapters change and a new character is doing the talking, sometimes I have to take a break as getting into a new person’s mind can be difficult.

Have that you found by continuing to write, and overcome these little challenges or difficulties have progressed your writing?

Yes, I think I’ve moved to shorter more concise sentences. I found Yann Martell (Life of Pi) a great influence, and Camus and Hemmingway are my heroes. I admire how they can paint a picture with so few words. Amazing.

I’ve love to paint pictures like them myself, and the best way I’ve found to do that is by playing with a much quirkier range of questions. Let’s paint some pictures with our next questions, starting with, have you ever been on a literary pilgrimage?:

Somewhat. I strive to write what I know, which is the midwest and south. And I’ve always loved WWII history. I combined those two in my upcoming book Shattered. At the beginning of the book, the main character works aboard the converted battleship Alabama. I wanted to see what the ship was actually like, so on vacation one year, we made a side trip to visit her. Seeing that majestic vessel was well worth the price of admission.

Speaking of magic vessels, can you cry underwater?

Yes, and I have. Belly-flops from a high dive HURT.

*Laughs* Indeed they do! What’ss your favourite word?

Nice. There’s always time for pie! And with the ideas of pies and belly-flops floating around in our heads, let’s see if we can make it a really interesting trio, by mixing one of my favourite questions to round out our chat. If you could breed two animals together to defy the laws of nature what new animal would you create?

An octopus and a shark. Octoshark … or Sharktapus. Wouldn’t THAT be terrifying?

Sharktapus! I think I’ve actually heard of a Sharktapus before, but never an Octoshark, so I think I’d want to meet that new critter first! Alas, we’re run out of time to birth all sorts of new ideas into the world, so we’ll have to stop here. Jeff, thanks so much for having a little fun with me today, and I wish you luck with your awesome upcoming writing project!

Excited to read the book we discussed today? Find it here on Amazon: ‘Neverland ( ASIN: B07DX6QXVQ )‘.

Want to find out more about Jeff Dosser? Connect here!