Author interview with Val Grian of ‘Tramps, Thieves and IT’ 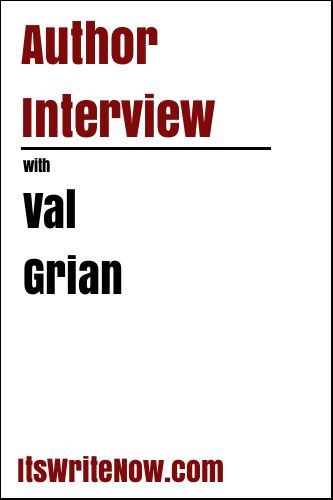 At some point, Lady Luck decided that she had paid too much attention to ungrateful Alan, and completely neglected George for no reason. “It looks like now is the high time to correct this injustice,” she thought once. Being very vigorous and determined, Lady Luck put the idea into action immediately. Which meant seismic changes in the lives of both main characters. And one of them didn’t like those changes at all…

So what happened to Alan and George? Well, the answer is in the book. As a bonus, you will also find out what happened to Hitler in hell and what the Devil and the English Queen have in common.

The story is almost based on real events. Some of them already took place in real life. Some are about to happen. Who knows, maybe to you…

I was about to throw out an old backpack when I found a little bit money in it. My wife saw this and came up with a concept of the book. I liked it very much and started writing it.

Wow, that sounds so simple! Once you had the concept down did you find that the characters came to the story as simply? Or did it require a bit of effort to encourage them to work with you?

I just started writing the book and the main characters “appeared” within one hour or so.

When you had the characters and concept firmly in hand, did you find yourself peppering in events from your own life to add a touch of additional complexity?

Absolutely. I’ve visited most of the places mentioned in the book and some of the events did take place in real life.

I won’t ask you which ones are true as that will give the book away, but on the whole, did you find yourself more energised or exhausted by getting these ideas onto paper?

Both :) One day I feel so excited I just can’t stop writing, the other day it takes hours to write a few lines and is very tiring. It depends on how I feel in general.

In general, I hope you have many many more exciting days than exhausted ones. So, one those days when you’re excited and working hard, what is the most important idea you wanted to share with readers that keeps returning to you?

Stay positive at every moment of your life, no matter how hard it is. You will get a chance, just stay positive and be patient. This worked multiple times for me.

You know I think the power of positivity is often underrated, but I feel that it can really change the way that your day plays out. And I think by being positive you also leave yourself open to learning more about your work. On the topic of learning, where do you feel you learnt a lot while writing and publishing this book?

I’ve cooperated with a professional editor and also took a few classes from a very experienced author while writing this book.

Getting tips, or even just watching experienced people can be a great way to improve your own position. With your greater understanding of the writing and editing proceses, can you share what’s at the top of your mind when you write?

I think about the characters of my books, imagine their feelings and emotions while they live through different situations.

Do you think your voice has improved as you’ve gotten better about thinking about your characters?

My characters have become more ‘complete’, more interesting. Now I pay much more attention to the development of characters, to the flow of the story. I try hard to make the impressions of readers as deep as possible. I want my readers not just to laugh at jokes and have fun, but also learn something.

Learning new things is important, but so it having fun. And so far we’re learnt a lot from your book and experiences but now I think the focus needs to be on fun questions, like if space is a vacuum, who changes the bags?

The God is much smarter then vacuum cleaner designers, he uses black holes instead of bags.

They’re so much more effective than those pesky vacuums! Why is a square meal served on round plates?

I wonder if it works in reverse, and a round meal looks smaller on a square plate. What’s your favourite word?

Oh, I love it when someone loves, and recognises the importance of politeness. Are you left or right handed?

Awesome talent! Take both of your skilled hands and wrap them around the next question, if you invented a monster what would it look like and what would you call it?

I’m not very good at inventing monsters. I’d love to invent something that would make people friendlier and kinder to each other.

Now that’s a creature that I’m sure would be in high demand right now if they existed. I do love that creature enough to see if you have another one, this time of the animal variety that you would be interested in creating? This time, if you could breed two animals together to defy the laws of nature what new animal would you create?

I’d rather concentrate on keeping the animals we already have :).

Good point, starting with the animals that are already here is probably the best move! We’ve had fun today with a dash of thieves and tramps, but sadly we’re at the end of our time. To wrap things up Val, could you leave us with your favourite quote from your book to entice a few readers who might still be on the fence about giving it a go. What can you tempt them with?

For some reason, people dedicate years to hateful jobs when on Earth, although nobody forces them to do that.

Ahh, that one is a mystery for the ages! And perhaps our readers will find an invigorating point of view about this in the pages of ‘Tramps, Thieves and IT’.  Val, thanks so much for sharing your novel with us today, and I wish you the best of luck with it’s future success!

Want to find out more about Val Grian? Connect here!