Author interview with Jo Sparkes of ‘The Dim Continent’ 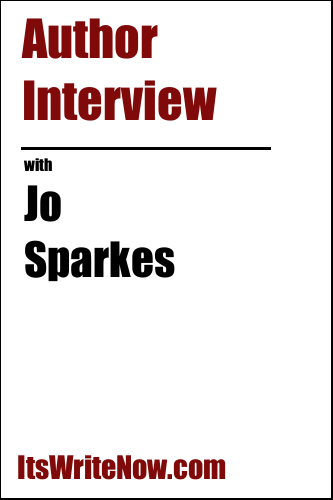 In a land of strange beings and dangerous animals, the three friends must again pool their skills, this time not just to save themselves – but to save all their people. The fate of Skullan and Trumen alike depend on defeating a powerful enemy who has plotted their destruction for centuries. The final battle looms in the evil heart of power – the Dim Continent.

Will these three friends be able to pool their skills and save their people, or will these peoples be fated to exist only in history? Jo Sparkes, the author of ‘The Dim Continent’, the final book in The Legend of the Gamesmen, has agreed to be my guide through this world today. Jo, it might be a little tricky to pinpoint now that you’ve released the final book in this series, but do you remember how this book began?

Were some of the events, either back in the starting simple situation, or the events that followed borrowed, or inspired from your own life?

Yes – though it sound very strange. I spent a little time covering NFL football for a website.

*Laughs* I wasn’t expecting that connection between your life and your writing, but I think it just shows everyone how awesome book ideas can come from anywhere. Were the seeds of these characters also borne from your time in the NFL arena, or did they mature differently?

All are mixtures of people after applying certain experiences. One from an NFL player; one from a wealthy man in the UK. And one is a peculiar blend of 2 generations.

Oh, I really like the idea of blending a character from across the generations. I feel that it would give the character an interesting touch. Is the idea of making interesting combinations of ideas something that you like to keep at the top of your mind as you write? How do your thought processes generally unfold?

You create the character, and you create the scene. But then you have to hang back, and watch what happens. Strong characters rarely do what you expect.

As you watch these strong characters come to life in this book, what do you feel was the strongest message that they shared with yourself and of course the readers?

I love the way Marra grows. From humble, alone, and frightened to a woman who claims her power.

As your characters like Marra grow and claim their power, do you find yourself becoming energised or exhausted by getting it all down on paper?

Yes! Sometimes sanding down that final edit (which never is final, by the way) drags long into the night. But when you know you’ve nailed it – that you actually hit that perfect scene – you tear up and smile.

Ah, the smiles! You know you’ve done well when you can’t get the smile off your face! Looking back on it all, what do you felt that you learnt by putting the smile on your face at the end of this book?

It was the first thing I ever wrote purely for myself. Much of my writing has been guided by those who pay for it – which means they control the direction. I was astonished to find there were people who actually liked it.

Never be astonished by what people like, instead remember there’s an audience out there for you to meet and write to. Now that you’re more confident that people like you wrote, where are you turning your pen next?

I have a special heart project – a story that haunted me for years. It’s a standalone book about friends diving in the Caribbean and reincarnation.

Oooooh, that’s quite an interesting turn from both the NFL and the fantasy worlds. I’m intrigued. Actually, one of the things that really intrigues me is if you’ve considered about how you’ll pull all of these works together to form a single author brand to showcase your writing. Have you thought about how you might do this?

I’ve tried several times. And then the brand becomes a quirky idea, which morphs into a new character – and the next thing I know, I’m writing again.

*Laughs* Well, I don’t think you can call any writing time wasted so I think you’re where you should be! You know it really sounds like that you’ve got many ideas swirling around in your head. Do you feel that this is true, or would you say that your thoughts and writing and more structured?

There is a belief that writing has a beginning, middle, and end. It does not. It’s an iterative process, that can go on forever. The trick is knowing when to move on. Not, mind you, that I’ve mastered that trick. I’ve been handed a book or script of mine that won an award a year ago – and the next thing I know, I’m marking it up with edits!

*Laughs* I think that might be the temptation of the red pen. There’s always something that can be improved with the aid of a red pen and a slew of notes! One thing I love about a slew of notes is that they can take you on many different destinations, so let’s see how far we can travel in the remainder of our chat by exploring a few of my possibly disparate notes. We’ll kick off the fun with, have you ever been on a literary pilgrimage?:

The journey encompassed several goals, but occasionally I’d detour for a writer or a place. The most memorable, for me, was beholding Phaistos Disc on Crete. At the time it was believed to be the oldest writing in existence.

Nice! You’ve done well on that journey. If money doesn’t grow on trees then why do banks have branches?

Wisdom comes from knowledge and experience – beautiful leaves to be hung on the proper branch. This creates a mighty oak with roots – a proper bank for knowledge.

Who doesn’t love a proper bank of knowledge? What is your favourite word?

Good point! Love your logic there. Let’s go and find out what your zodiac sign is next. Where do you fit?

I’m so ‘on the cusp’ of Aries and Pisces, no one knows which I truly am.

*Laughs* Well, there is one person who really knows you who are, and I’d like to thank you so much for giving us a glimpse of both yourself and ‘The Dim Continent’ today!

Excited to read the book we discussed today? Find it here on Amazon: ‘The Dim Continent ( ASIN: B07GPWVVQB )‘.

Want to find out more about Jo Sparkes? Connect here!