Author interview with Joshua Ahye of ‘Into The Blue River’ 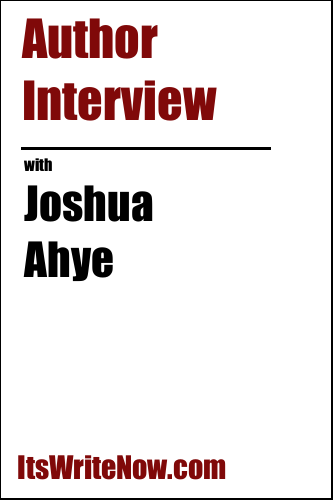 Into The Blue River is a new age medieval fantasy novel that follows the journey of young Kanoa. A blind boy who gains strange healing abilities and attempts to navigate the daunting world with his brother Khai, as they face off against a growing reptilian invasion.

Will these brothers be able to fight the tide of the oncoming reptilian invasion? Joshua Ahye, the author and creator of the world in Into The Blue River has agreed to play tour guide through the waterways of his novel. And first things first, we need to know about the source of this story. How did it all begin?

The book begins with the two brother’s being taught by their father. Afterwards, they rush to the kitchen as blind Kanoa is stopped from careening into a kitchen cabinet by his mother who scolds him for running as he cannot see.

How did you first meet this the boys and their parents?

The entire plot and every character came to me in a really long dream. Writing the book was almost like automatic writing.

That is so handy! Do you feel that the automatic writing process was sped up because the characters have had similar experiences to your own?

The main character of the book has many similarities to my own experiences. It really is a work of self-creation.

Does this type of self-creation work energise you, or does it tend to get a little dull because the story is too close to your own life?

It energizes me. It has been the most rewarding thing I’ve done in life.

It’s great to hear that you’ve found it so rewarding! Did you keep this sense of impending reward in your mind as you wrote, or did you focus on something else?

I mostly focused on making sure the writing, characters, relationships and emotions are consistent. I hate double-working. Most of that comes later in the editing process.

Was taking on the challenge of eliminating double working something that you feel made you a better writer? Do you feel that you’ve progressed as you’ve kept writing?

I feel empowered. I feel as though the message in my book are clear and help people to become better humans and treat others better.

Was this clear message of helping others and treating them well the central tenant that you wanted to share with your readers?

The book deals with a variety of issues related to living with disabilities. The main message of the book is one of love and respect for others as well as overcoming adversity through dedication and fearlessness.

Was there a sense of adversity, or challenges that you personally felt that you faced, and conquered while working on this novel?

For me, it was very easy as I was able to write at work. I work in a small theater and a lot of the shifts you sit down, sometimes for 3 hours. So finding the time wasn’t an issue. It’s all about finding the good people and good employers.

Good people and employers are out there, and well worth the effort to find. Was the importance of supportive relationships, with good people was the biggest learning for you as you wrote?

Just the fact that I could do it. This is my first of many books and plays and I’m excited to have the confidence to keep going forward.

Have you taken this confidence forward to create your own author brand to proudly gather and show your work as a set?

I had a lot of times where I wanted to publish under a pseudonym. Eventually, I decided it was my work and I had to own it. I’m working on making a name for myself and am dedicated to making sure my work has the same high standards as the first book.

What high standards of work can our readers expect to see in the near future? What are the projects that you’re working on that will help you build a name for yourself?

I’m currently working on the sequel to this book. It will most like be titled ‘Into The Red River.’ I also have another book and a play in the works.

With so many projects in the works, I think you’re well on the way to having an awesome name for yourself. But while you’re building your name, don’t forget to have fun. Let’s have a little fun with words now to keep your mind flexible and fit for each new writing project. And we’ll start the fun with, can you cry underwater?

Yes, but at least no one can see you crying.

Not being able to be seen is a good point. If space is a vacuum, who changes the bags?

God, but only when he has the time.

I would have thought that God might have had a cleaner, to free up his time for things other than cleaning, but you never know! Why is a square meal served on round plates?

Why is a round meal served on square platers?

Probably for a single reason – to make people buy two sets of plates! If you invented a monster what would it look like and what would you call it?

It would look like Donald Trump and it would be called The Orange Idiot.

*Laughs* I’m not sure if you get creation rights on that one, I think that might fall under plagiarism! Unless of course, you can prove that there’s some change in there. One example of a change that I’d like to see would be when Batman versus a vampire. What do you think happens if Batman gets bitten by a vampire?

Does that mean the wings on his batcape let him really fly? I’d like to see that! Perhaps we would create a better creation by adding other things together. if you could breed two animals together what new animal would you create that would be better than Super Batman?

A border terrier and a red panda to make the cutest animal on earth.

OMG, so cute! And probably quite fierce when crossed, but still – so cute! You know I think you should go and bring this little cutie to life in your next book, so I’ll end up our chat here so you can get right onto it. Joshua, thanks again for chatting with me today and I hope you enjoy every step of the way towards creating that name for yourself.

Want to find out more about Joshua Ahye? Connect here!