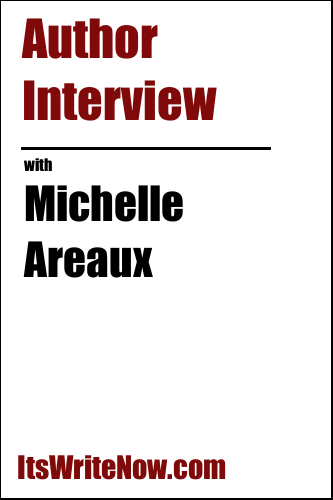 Sixteen-year-old Elle thinks she’s got life in Shady Oaks all under control until new boy Asher comes to town. Elle can’t explain it, but she can’t deny the connection she feels to him. Things with Asher are going great until they’re out one night and nearly attacked by a large wolf. Before she knows it, Elle’s life is spiralling out of control: Maddox is in love with her, she and Asher are in danger… and she learns she’s a shifter! If that wasn’t bad enough, she finds herself in the middle of an ages-old war between shifters and hunters. What will happen next?

Who will win the war between the shifters and the hunters? Will Elle be able to survive the war? To find out, Michelle Areaux has set aside a little time for a fast chat about Asher, Elle and the tale of ‘Evershade’. Michelle, can you situate us in this world of by telling us a little about what originally this story?

This book began from an image in my head of a wild and intense fight scene. I just had to recreate it and then as my story unfolded so did this messed up fantasy world full of shifters and other paranormal beings.

There’s such a wonderful cast of paranormal and not-so-paranormal characters that you introduce the reader to in the pages. Did they also come to life from that intense fight scene?

Yes, I just saw this teenage girl who was struggling to uncover her own voice and I knew I had to let her shine.

Did you find that you used experiences from your own teen years, or from the years after this period to her uncover her voice?

I always add in my own life experiences or emotions when I write. And yes, this novel added some moments from my own teenage years where I found myself not sure of who or what I was.

Those teenage years can be tricky when you’re not sure who or what you are. Was facing this challenge the most important message you hope readers take from Elle’s adventure?

The most important message I wanted to portray in my book is to be brave and to always believe in yourself.

Did you learn to believe in yourself while you were writing this book, or did you find that you learnt something else more important?

My biggest learning experiences were to add in elements of fantasy I had never delved in. As a paranormal and contemporary writer, I had focused more on stories, legends, and historical ideas. This allowed me to really become creative.

That’s awesome! Are you still putting this new creativity to work on new projects?

Currently, I am working on the fourth book in the Shifter Chronicles.

Wow, four books in and your creativity levels are still going strong! Strong enough that I think I can hear it calling you back to finish that fourth book, so I’d better let you get to it. Michelle, thanks so much for sharing a glimpse into Elle’s world with us, and I hope to hear more about her next adventures soon!

Excited to read the book we discussed today? Find it here on Amazon: ‘Evershade ( ASIN: B07BPCCG1V )‘.

Want to find out more about Michelle Areaux? Connect here!