Author interview with N.R. Lovitt of ‘Magoch: Young and Lost in a New Era’ 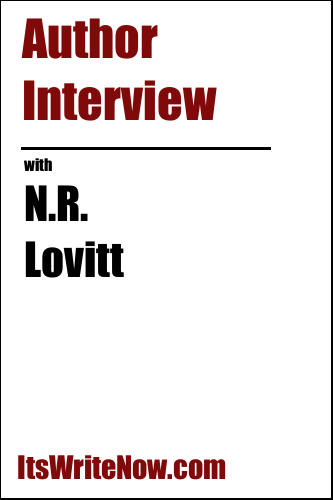 When Ezreth, an old world mage, awakens, he steals an ancient book and causes a magical event that strips the modern world of its normality, leaving the citizens of Kale to deal with the dangers of living in a world ripe with magic. After doing so, his magic interests a wealthy historian child named Ms. Vulpine, who seeks to discover why his abilities are similar to hers. Ms. Vulpine’s need to learn about Ezreth’s magical past puts her well-kept secrets at risk as she tries to find him before the government or anyone else does. Meanwhile, Chip, an indecisive loner in high school, receives the gift of magic and a new, dark, and treacherous pathway opens up for him. Tensions rise because of those using their newfound abilities for misdeeds as Chip learns about his magic and himself.

What will the magic teach Chip about himself? N.R. Lovitt, the mind behind the magical journey ‘Magoch: Young and Lost in a New Era’, has kindly set aside a few moments to explore this wondrous world with me today. N.R., how did this world that you describe so clearly in this book first set seed in your mind?

It started as a collection of sticky notes from the mind of a fifteen-year-old. All of which have been burned since.

Did these sticky notes detail events from your own life that you used to create texture in this tale?

Yes. A lot of the conversations I had in my life are sprinkled into the book.

I love the idea of conversations being sprinkled through the book. No doubt having these conversations clear in your mind made it easier for the characters to come to life. Can you tell us a little bit about how they developed?

I drew them first. I originally planned a comic.

Oh, wow that’s neat! Could you see your characters in your head as you wrote?

Yes, I picture all of my characters in cartoon form whenever I write, so it’s a personal TV show in my head.

Does having this personal TV show in your make it easier to keep energised by writing?

If I’m distracted by something else like games, thinking about writing exhausts me. But once I get started, there’s nothing stopping me but the bliss of sleep.

It sounds like you got some solid writing hours in while getting this book written. Looking back, what do you think that you learned by taking the time to get this book to publication?

Always sort your ideas! Never make a todo list. It will get big. TOO BIG.

*Laughs* Oh the trouble of the to-do list! There’s never enough paper to list everything that needs to be done! What was important to share with you readers in the pages of this magical journey?

You have to put in an effort. Nothing will come to you. But if it does happen. Be wary.

You’ve certainly shown that you know how to put in an effort with your writing career! What steps are you currently taking to keep yourself moving foward?

On my website, I write side stories within the world. All of which take place after the event that occurs in the book. One is called Uber Hero. It’s about an Uber driver who lives in the now superhero capital of the country. The second, Sievenout, is about a team that smuggles a mage into their prejudiced country. The third, Guiding Star, I mimic narrating like the planet earth series about a girl stuck in the desert with magical creatures.

A great range of storytelling in action there that I plan to jump into once we’ve finishing chatting today, but I still have a few fun questions left that I’d like you to answer to test your fictional finesse. We’ll start with an easy one, what is your favourite word?

Henceforth. It’s the perfect word you can randomly toss out to confuse your friends into questioning what time period they’re in.

You gotta keep them guessing! Why is a square meal served on round plates?

This is a conspiracy spread by the triangle people.

Those triangle people! Always getting up to mischief! On the topic of mischief, what happens if Batman gets bitten by a vampire?

He can finally say he has superpowers.

He’s gotta get them one day! And finally, to finalise our fictional question flurry, what new animal would you create, if you could breed any two animals together?

A moth and a firefly. It’ll chase itself for its entire life. *evil laugh*

*Laughs* That would be quite a sight! Perhaps it’s another tale worth exploring on your site? Either way I think it’s time that the readers and I check out your site and book, on the back of those tasty temptations that you shared with us today. N.R., thanks for chatting with me today, and I hope we’ve enticed readers to flick through the pages of Magoch: Young and Lost in a New Era!

Excited to read the book we discussed today? Find it here on Amazon: ‘Magoch: Young and Lost in a New Era ( ASIN: B07D28FNY5 )‘.

Want to find out more about N.R. Lovitt? Connect here!