Author interview with JoAnn Hogenson of ‘Terror in Boring Town’ 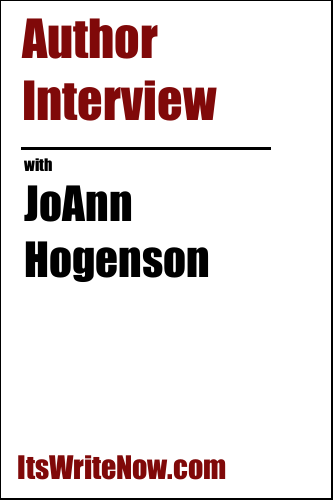 Winner of the 2018 Moonbeam Bronze Medal Children’s Book Award! Twelve-year-old friends, Sam and Rex live in a boring town. But then mysterious strangers arrive, and the boys’ humdrum summer vacation turns into the exciting adventure they’ve dreamed about.

When Sam and Rex accuse the strangers of being criminals, no one in the town believes them. The boys draft a plan to prove their suspicions are correct by uncovering the dangerous plot, which involves risking lives.

But will their plan work? Will the boys be able to stop the criminals in time? And whose lives will they be risking to expose the criminals?

Meet the boys, watch them put their plans into action in the award-winning, while I chat with author, JoAnn Hogenson about the award-winning ‘Terror in Boring Town’! JoAnn, let’s take it back to the beginning, what was the inspiration behind this story?

Oddly enough, many years ago I did a Google search for a zip code. I typed it incorrectly and the town of Boring, MD popped up. I was intrigued and researched this tiny town. Then I wondered what would happen if two boys who were friends, one who hated his boring town and one who saw adventure at every turn, actually ran into something exciting.

*Laughs* What a great idea! Once you had this idea, how did the characters evolve?

Sam, the kid who is always bored reminded me of many kids who are bored in the summer when school’s out and there’s “nothing to do”. Rex has a vivid imagination and find adventure in the most minute details of life. Both of these kids stem from my own summer adventures, at times boring, but other times, adventurous and exciting.

Oh, tell us a little bit more about your own adventures.

When I was a kid, my brother and I roamed the neighborhood in search of adventure. We never found anything as exciting as what Sam and Rex uncovered, but there were some pretty fun adventures. I tried to capture some of those feelings.

Do you find that by trying to capture these feelings you also bring lots of energy to the writing process?

Oh, writing most definitely energizes me. I can literally forget to eat, sleep, etc. when I’m on a roll. My husband often comes into my study and reminds me to get up and take a walk.

Husbands are good like that! When you’re forgetting about those everyday basic things, what is your mind really focusing on?

When I’m writing children’s books, my son is ever present on my mind. The reason I started writing them was because he had a difficult time when he was a child finding books that interested him. I wanted to create books for kids who couldn’t find what they were looking for.

So, what is the important interest that you wanted to build for a child reader in this book?

You can find adventure anywhere-even in a boring town, if you’re open to finding it. The other big part of this story is the friendship not only of the two main characters – Sam and Rex, but of the entire town.

Now, there’s a little touch of magic in your writing. Why do you write stories with a splash of magic?

Because that’s how I view the world. There’s magic all around us, but we need to be open to seeing it. I’ve always been open to having magic in my life and it’s brought me this far. I wouldn’t want to live in a world without it.

Me too! So, where are you splashing a little magic into your writing at the moment?

You’ve been writing a while now. Do you feel that you’ve seen a progression of your writing from your first books to what you’re writing today?

I’ve been writing for twenty years, so many things have changed since I began. I had no voice at the beginning. It was developed over time as I matured in my writing but also gave myself permission to bring that voice forward in my writing.

My author brand is basically a simple statement that I created, “stories with a splash of magic.” I try to input just a small slice of something magical in each story. The Prince and the Pirate series is pure fantasy, so the splash is more like a wave of magic. There is a splash of magic in A Sam and Rex Adventure series, but it’s not obvious. It may become more obvious in later books, but for now, I’m keeping that a hidden secret.

Oh, we can’t uncover all of the secrets here as it will ruin all of the fun, so let’s talk about some other magic. How about words. What’s your favourite word?

Nice choice! If you invented a monster what would it look like and what would you call it?

I did invent a monster in Skerry Island. It’s a sea pig, a large pink sea monster big enough to swallow a ship, with scales, pig ears and teeth the size of a person’s foot.

Oh, that’s something I want to meet. You know I also like to ask writers about creating a hybrid animal. Are there any hybrid animals that also live with the sea pig around Skerry Island?

I created an animal with a monkey’s body and praying mantis head in Skerry Island.

Well, I’ve run out of magical questions for today, so I might go to Skerry Island and pick up a copy of Terror in Boring Town to keep the magic flowing. JoAnn, thanks for getting myself and the readers to see a little magic today, and I hope to see more magical stories from your pen soon!

Excited to read the book we discussed today? Find it here on Amazon: ‘Terror in Boring Town ( ASIN: B071VBL9LB )‘.

Want to find out more about JoAnn Hogenson? Connect here!