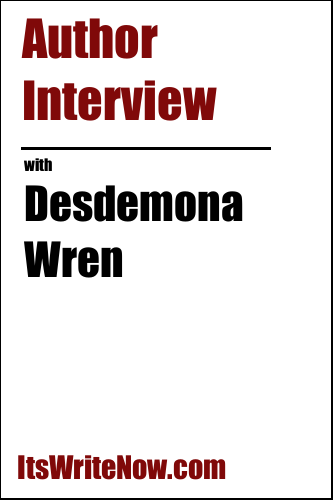 Marjorie Diaz is a story about a college senior, Marjorie Diaz, who falls in love with her classmate, Patrick Watkins. In the process of their whirlwind (and fairy tale-esque romance), Marjorie learns that everyone around her is keeping secrets, even her best friend Lucian Maravalle. She struggles to piece together what those secrets could be whilst trying to make it to graduation, but her curiosity could cost her what little life she has left.

Will Marjorie have anything left? Desdemona Wren, the brainpower behind the book ‘Marjorie Diaz’s Unfortunate Introduction to Magical High Society’, has set aside a little time to chat with the curiosity in this novel. To get things started Desdemona, can you take us back to the start of your tale?

Marjorie Diaz is a rewrite of a rewrite of a rewrite. Originally, I wrote a flash fiction based on a strange dream I had in 2015. I found it at the beginning of this year after publishing my first book, Bloom, and it didn’t sit well with me. So, I rewrote it again as a one-off short story.

Then, I realized this was a story I’d been writing for decades. I had written so many bits and pieces of it under other names in different lifetimes that it was too hard to pass up making it a full-blown urban fantasy series.

With so many bits and pieces of the story lying around, how did you bring the characters to this one story?

They sort of just popped up and introduced themselves like “Hey! I’m in your story now” and I was like “Oh…okay.” I guess that’s how all my characters come about. Marjorie’s name actually came from Marco Diaz from Star Vs. Luciana’s name is semi-based on Star and Tom (Lucitor) cause I’m obsessed with Star Vs. right now.

Do you think that any of the characters who popped up, or maybe even the events they deal with were drawn from elements of your own life?

The main character, Marjorie Diaz, has borderline personality disorder which is something I know intimately. Her personality is based on mine and one of my best friends’s who also suffers from BPD.

Your book also deals with another big issue, the LGBT community. Why do you write LGBT?

When I was younger, before I moved back to California, I grew up in South Carolina. To be a little more candid, I was a gay teen in South Carolina. My school’s library had exactly 3 gay books, all of them tragic romances where the characters died at the end or they were shamed for their choices.

So, I felt like I had to be ashamed. That’s what everyone around me said and that’s what the books were telling me. I was miserable. I NEVER want anyone else to feel the way I did. I’m a hardcore advocate for gay rights and I write a whole slew of transgender characters. I will be the change I want to see in the world.

With such big topics like BPD and the LGBT community, did you find yourself exhausted by the prospect of writing?. Or do you feel that you were more excited about the challenge of tackling these subjects?

Both. I don’t feel good if I go too long without writing, but if I go too many days without a break I can get overwhelmed.

What did you personally learn while crafting this story towards its end?

That I need to dig in deep to my character’s emotions and let people in.

Are the characters emotions and how you’ll get them to share their lives with others at the top of your mind as you write? What’s on your mind?

WHEN I’m writing? Nothing. I let my mind go blank and let my characters take over. It’s their story, not mine.

So what is it that their story tells?

That mental illness is hard, asexuality is valid, and female friendships are incredibly strong.

I love that your book has three solid ideas that you can clearly state. Do you think it has become easier for your author voice to clearly state the important points in your book as you’ve kept writing?

Oh man. It’s changed from whiny and stunted to bold and hilarious. I used to write nothing but emo drama and then nothing but unrealistic romance (usually there’s nothing wrong with this, but mine was so so bad), but now I mostly write dark comedy and magic.

*Laughs* I love that you have the honesty to state that your writing was whiny and stunted, being that honest is the best way to move forward! Has your confidence to keep writing in that dark comedy and magic space made it easier for you to construct an author brand around your writing?

As a marketer, I’ve been creating my own brand for pretty much forever. I started with my carefully curated penname and my logo and even the types of books I write. Marjorie, however, was really off-brand for me. I mostly write lesbian stories with NO vampires, but Marjorie Diaz had different ideas.

From this experience, I’ve learned to go with the flow and not worry too much about what genre I’m writing in and more about the story I want to tell.

If our readers go with the flow, what new stories can they expect to see from you soon?

Oh wow, so many. I’m working on an untitled short story for an anthology I was selected for, I’m working on Call Me Eli a Cinderella rewrite about a trans man’s search for acceptance in his community, I’m writing Marjorie Book 2, and also Nighthawks, the second in my Monster Love Novella Series. I also have Wixen, a series I’m writing about witches, A City of Glass & Sand, and a high-tech magic book called Tranquil.

Wow, you are BUSY! It almost sounds like you don’t have a moment to sit back. You know what, let’s take a few moments to sit back and relax with some fun questions before you get back to your stories. One of my favourite relaxing questions is can you cry underwater? What do you think?

I’ve actually tried this! And, no.

That’s a shame because I really do like the visuals of it. Instead of water, let’s have some visual fun with animals. If you could breed two animals together what new animal would you create?

A flamingo and a giraffe. A Flagraffe. It would be an abomination of the utmost proportions and I’m proud AF of it.

*Laughs* And you should be. So much so that you should feature it in a new story when you have a few minutes to spare! Actually, I’ll let you go so you can spend a few minutes on it now before you return to your tale of the day. Desdemona, thanks for sharing a taste of your writing with us, and I can’t wait to hear more about your journey in the future!

Want to find out more about Desdemona Wren? Connect here!