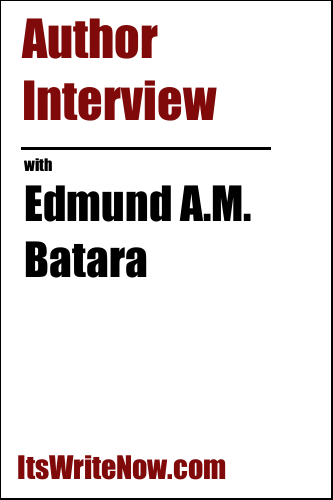 What if you find yourself in a strangely familiar world? A world full of Earth’s mythological beings, lost civilizations, and people from its primitive and brutal past? Where magical energy still exists. Would you survive?

Would you survive in such a foreign, yet familiar world? Edmund A.M. Batara, author of ‘The Accidental Archmage: Book One – Ragnarok Rising’ and I explore this question, and this fictional world in our interview today. Edmund, let’s start a the beginning. What’s this book all about?

‘The Accidental Archmage: Book One – Ragnarok Rising’ is about how a person from this reality would act and think if he suddenly found himself in a parallel world where most of the pantheons, beasts, and creatures of this world’s legends were exiled or transferred. Of course, it wouldn’t be denial as it would be a very short book. The chaotic mix of that fantasy world, with Earth’s mythical beasts walking about, would make sure of that. Though the epic itself does mention incidents of previous visitors reacting as if it was but a dream or a nightmare.

What thoughts lead to this epic tale?

Would you believe it all started from a discussion one Christmas dinner about the molarity in one of the greatest fantasy epics? We found that the black-and-white dichotomy of “you’re ugly, so you’re evil, we’re basically human, so we’re the good guys” was a tad simplistic. Thinking creatures, mortals and extraordinary beings alike, would be driven by their motivations, shaped or fashioned by their experiences and environment. Though only a precious few do transcend that level of awareness.

I’m curious to find out how you constructed characters to would fit around these ideas. How did they evolve?

After the first two chapters, I guess the story starting writing itself. A damned nuisance at times. Ideas, scenes, and dialogues pop up at the most importune moments.

Did you find writing energising when you found that the story started writing itsself?

Depends on the day I had before sitting down to write. I do try to write a minimum of 1,000 words a day.

That’s a solid daily target. What did was the central things that you learnt while trying to meet this challenge?

Ah, the pains and pleasures of research. What central idea did you use to bring your research together with your words? What was the one vision that you kept at the top of your mind as you were writing?

The story, otherwise you’ll never get it done or take an inordinately long time to finish it.

For you, what was the main point you wanted readers to take from your book?

Nothing is simple as it seems.

With so many interesting and perhaps challenging thoughts in your work, I’m curious to find out if you’ve ever been inspired to take a literary pilgrimage?

Nope. A firm believer of “Your own path, take you must” school of Yoda.

*Laughs* I’m not going to dis anything that comes out of the mouth of Yoda. Wise words he speaks.  Since you’ve focused on your own path, do you feel that you’ve progressed as you’ve continued along your way?

I honestly don’t know the answer to this one. Only readers, not paid ARC reviewers (I don’t use them), could answer this question. Well, your copy editor might have his or her opinion. A story might not find its voice or audience now, but who can say anything about its status two or five years down the road?

Have you tried to pull your books together under an author brand so that readers who might discover your work two or five years down the line might be encouraged to read them all to see your point of view?

Nope. I just write. More for fun and the experience of sharing your imagination with others. I did maintain the “soloflyte” name in my blog and other fora. But that is my pen name for stories written for free web-based serials and novels. I started there and still write stories on such sites.

With so many stories to be told, what are you currently writing?

Book 2 of the Summus Magister series, a light fantasy series, based on an alternate history, and Book 1 of Planar Wars, a story of apocalyptic fantasy and science fiction, where a merging of a dimensions results in fantasy biting our reality. Both are due to be released this December 2018.

For 2019, Books 5 (Loki’s Gambit) and 6 (In Tartarus Dwell the Damned) of the Accidental Archmage are lined up together with Book 2 (The Dragon Duke) of an apocalyptic science fiction/fantasy series, Manus Dei. Manus Dei is more of Armaggedon and the struggle to delay it. I hope I can round out next year with two more books: Though a Paradox, Darkly (a science fiction novel based on Hempel’s Paradox) and The Old Man on the Mountain (a speculative historical fiction on the Hashashim and how they managed to turn the world upside down; interpreted based on real historical events in the Middle East).

Yep, you’re booked for the rest of 2018 and well into 2019. I really hope that you can manage to hit all of those targets. With so much time planned for writing do you ever let your mind have a little time to ponder other curiosities? I’m guessing not, so let’s do that now. Curiosity number one to think about, if money doesn’t grow on trees then why do banks have branches?

That makes sense. If space is a vacuum, who changes the bags?

I’m glad to hear that Bob’s got himself a decent job. Why is a square meal served on round plates?

A triangle plate would be messy.

But I think the triangle plates would stack better in the dishwasher than round ones, so I don’t think they should be discarded quite so quickly.

Can you cry underwater?

Yes. Everybody can. That’s why the sea is salty.

Oh, that’s so sad. It’s all just tears! What is your favourite word?

“Strewth!” No. Sorry, I just finished a chapter of Book 2 of Arcanum and I guess the milieu and language stuck in my brain.

*Laughs* Bloody oath, we all need to use strewth a lot more! And I think it would be hilarious if Batman, in particular, said it more. In lieu of that, what do you think happens if Batman gets bitten by a vampire?

Handy little arrows. They’re good for shooting things like monsters. If you had to go monster hunting yourself to catch a creature you had invented, what would you be hunting? And what would it be called?

Bob. Please don’t ask me about monster descriptions. Planar Wars involved research on religious and cultural beliefs of ancient civilizations and I don’t think any modern concept of a monster could come close. And I am not even talking about the Aztecs.

Bob is a busy dude! However, it does make sense if he has a bit of monster in him if he’s changing the vacuum bags of the universe. While we’re still creating new creatures, what animals would you breed together to create something completely new?

An elephant tick, large as a house. No. Too weird. Sorry, I am not going down that road.

Yep, I think it’s best we get off that road right now! I think your road leads back to your writing projects, but before you take off, can you leave us with a taste of your writing to entice us to follow your words further. How about your favourite line?

It’s a line from Stories of Adar (A companion book to the Accidental Archmage series) actually: “By Nergal’s hoary balls!” LOL

*Laughs* What a thought to leave our chat on! Edmund, thanks so much for sharing insights into your novel,’The Accidental Archmage: Book One – Ragnarok Rising’, and I hope we’ve piqued the interest of many a reader and encouraged them to pick up a copy.

Excited to read the book we discussed today? Find it here on Amazon: ‘The Accidental Archmage: Book One – Ragnarok Rising ( ASIN: B076G5M6DX )‘.