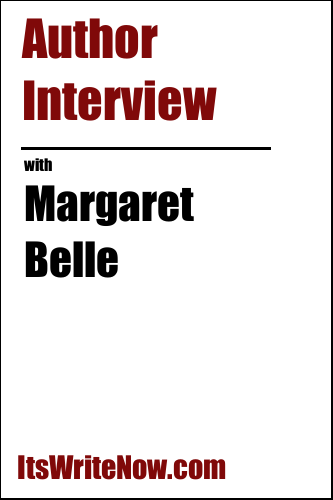 The Hunter’s Wife is about twin sisters who experienced fertility problems and what happened to one of them when, wanting a child, enters a clinic run by an unscrupulous doctor.

What lies in store for these sisters? To find out, I’ve been joined by Margaret Belle, author of The Hunter’s Wife to unravel the mysterious thrills. Margaret, can you share what inspired you to write this tale?

Two things came together: First, my degree is in Biology – and I have always been interested in all things DNA. Second, I watched a television program where a famous urologist was being interviewed and he made some startling pronouncements regarding the ability to create children using DNA from people who had been dead for hundreds of years.

That’s a very intriguing claim and one that I’d like to explore further, but we’ve only setup a short time to chat today, so we’d best leave this area for additional investigation so we can focus on the The Hunter’s Wife. Looking back, what do you remember of the characters first coming to life?

I needed identical twins, so it wasn’t that difficult to come up with a set. I usually have one or two characters in mind when I start a story, and the rest of them show up on their own.

Once the twins and the rest showed up did you find it important to dab elements or events from your own life experiences into the story to build the richness?

Only my love of science and my understanding that if something new seemed possible, even something immoral or illegal, there was a scientist somewhere who would give it a go.

That we never really know people, even those closest to us.

That’s a very powerful idea, and one that I’m sure many people may not have considered. What do you personally feel that you learnt while refining and presenting this idea through the plot?

That I could write a sequel that was every bit as good as the first book, that a sequel is harder to sell than a stand-alone book, and that I will try and resist writing endings that leave the door open to them!

Do did you find it exhausting to write up to the level of the first book in the series? Or was the challenge invigorating and exciting?

Both. When I begin a new book, when a great idea to move the story forward or a twist occurs to me, I’m energized and I can write for days. Then I’m exhausted. Then a great move for a character comes to me or a “what if” comes to mind, and I’m back to being energized.

Do you write every day?

No. Sometimes I wish I could. Weeks can go by before I feel the familiar push in my head and in my body — it’s weird. It’s like something inside that says, “It’s time.” Even if I don’t know where the story will go or don’t have a specific scene in mind, I know the story is ready to come out. And I love that because I know I’m starting an adventure that will take me where it wants, and that I will have little to do with the direction it takes.

Well, I hope that you’re able to continue to feel that push of a great story in your mind so you can write every day. I wonder what would happen if you tried writing when that push from your mind isn’t there. You might even be able to explore the direction of new projects! Speaking of new directions, what projects are you currently working on?

A book called THE GRANDDAUGHTERS. I’m at the beginning, which means I have the first and last chapters written and a few chapters without numbers, because I have no idea right now where in the story they will fall. This seems to be the way things go with me.

This book is about three elderly cousins who accidentally find out why they were cut out of their grandmother’s will almost 50 years before.

Oooh, an intriguing directional change from the last novel. Which I feel asks the question, what’s going on in your mind as you write?

For THE GRANDDAUGHTERS, I do have 3 specific older women in mind as models for gestures, and era references, etc. For THE PROCEDURE, I went on a wig site and downloaded a picture of a woman in a red wig that looked like the character I had in mind. I taped it to the wall over my computer so I could stare at it. I also listened to Dvorak’s New World Symphony to keep me in the Jurassic Park frame of mind.

*Laughs* I love the idea of your gazing at a wig model on the wall while chilling out to Dvorak. It feels like it has a nice poetry all of its own. Do you feel that your attitude to writing, and of course your voice as an author has changed from your first project to what you’re writing today?

I trust my voice now more than I did at the start. I know that when I’m ready to sit down and write, the story will come and that allows me to be more confident. I always have female protagonists that are stronger than they realize and now I let them make bold moves toward the resolution of their stories.

Have these protagonists formed such a strong impression on you that it’s lead you to create an author brand around these types of character? Have you really turned your mind towards branding at this stage in your writing career?

A literary agent in NY tracked me down to talk about representation. But at my age (72) I was not interested in having someone imposing deadlines on me. I’m still not. But she did tell me I needed a platform and I took that advice and started a Facebook page, which I don’t work on as much as I should. When I do post, I speak casually about lots of things to readers, not just my books, and hope that some of my personality comes through. I’ve learned that writing isn’t enough. You do have to find ways to reach more and more readers.

Indeed, the importance of having your own platform is becoming clearer and clearer, and it’s fantastic to see that you’ve taken the first steps in that direction. I’m sure you’re having a blast doing it too, as connecting with readers can be so much fun! And I can’t hold back the fun much longer, let’s fun-it-up with some funkier questions, like if space is a vacuum, who changes the bags?

I agree! Changing vacuum bags is a job for someone else! What’s your favourite word?

Nice choice. I would ask if it appears in any of your books, but that might give the game away a little, so instead let’s ponder the power of imaginary animals. If you could breed two animals together what new animal would you create?

A giraffe and a dog. I need something that will fetch my drone out of a really big tree in my yard.

Are you sure the doggie part would return the drone in working condition, or would it be a bit too chewed? Instead of chewing on the idea of the most awesome giraffe-dog I’ve ever seen, let’s round out our chat with your favourite line from The Hunter’s Wife. What’s the line that will get us looking for more?

You can never really know people, even those closest to you.

But we certainly will try when we read your books! Margaret, thanks for sharing a taste of your writing with us today and I hope to see more soon!

Excited to read the book we discussed today? Find it here on Amazon: ‘The Hunter’s Wife ( ASIN: B078KPSGBZ )‘.

Want to find out more about Margaret Belle? Connect here!