Author interview with Brett Currah of ‘Under A Crimson Sky’ 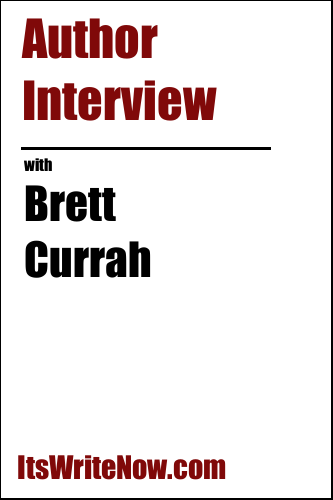 All is peaceful in Alriche, but not everyone loves peace. Lord Rihm is discontent with his life as a Lord and he will stop at nothing to gain the title of king. Dag, who learns about this dastardly plot, gathers a group of unexpected heroes named Kor-Voda, Oremothe and Gottrak. Together they must find some way, impossible as it may seem, to stop the terror that Lord Rihm Unleashes upon the world.

Will they be able to stop the terror that’s being unleashed, or is the group doomed to succumb to a world without peace? To find out, Brett Currah, author of ‘Under A Crimson Sky’, and I have decided to sit down and explore the possibilities for peace. Brett, before we get to the peace, let’s explore the underlying conflict, and how it all started. What can you share with us about the beginning of this book?

My book began with two characters in mind. Dag and Kor-Voda were the original team that I pictured and modeled after my best friend and myself. From there the world I set it in came as bits and pieces of places I have been in North America. These were the basis for my story. The setting and these two characters have always been central to the story no matter how many changes have been made.

Characters really are important drivers to stories. You mentioned that a few of them were modelled on yourself and your friend. What did you use to develop the rest of them further?

My friends for the most part. I also added different parts of my personality to each. I sort of just discovered them over time with life.

Do you think that your life discoveries and experiences also helped build the story’s plot?

Yes, I did. As I said I already modeled places after places I’ve been. Especially the Rocky Mountains in Canada which are a particular favorite of mine.

As for plot I wrote this a little after I lost my mother from cancer which is why the darkness and the evil which plagues the world is described as a cancer and destroys all in sight.

I’m sorry to hear about your loss, and I hope that you found that writing helped you. Looking back, do you feel that the writing keep you energised, or did you find it more overwhelming and exhausting?

Bit of both. I love doing it, but if I write for weeks on end I will get exhausted in the end.

What do you feel is the most important thing that you learnt by tackling your periods of exhausting head-on?

That writing a book is never easy and it is important to forgive yourself if you make a mistake.

Was the importance of forgiveness the central idea that you wanted to share with your readers within the pages of this novel?

The most important thing is that there is always tomorrow and at times that is all these characters have to cling onto.

Did you find that your mind clung onto central ideas like that one as you wrote? Or does your mind tend to focus on another idea elsewhere?

My love for telling stories. Once I have an idea I just have to get it out there otherwise it will just never leave me alone until I do.

A couple stories. One is young adult and the other is an adult. Both are fantasy, but I’d rather not say much more right now.

Well, we can’t reveal all of your secrets, but can you instead share how you feel that your voice as an author has changed between ‘Under the Crimson Sky’, and your current projects?

It used to be clunky and slow. Now its just a bit of me talking as I would so someone telling them something fun or interesting that happened. I always prefer natural over long drawn out sentences and big words that nobody knows.

Big words can be fun, but I agree with you that natural language of talking is much smoother to read and write. Writing really does speed up when you toss out that thesaurus! Tossing out the rules books is always fun, and let’s toss out the rulebook on interviews and have some fun chatting about some of the quirkier aspects of nature and of life. Let’s start with, have you ever been on a literary pilgrimage?

Life is one big pilgrimage of stories and experiences.

Oh, that’s a wonderful answer. I might have to borrow it in the future! Can you cry underwater?

I am sure it would feel weird if you could.

*Laughs* Moms are super awesome at vacuuming, so it does make sense that there would be a space version to tidy up the universe. If money doesn’t grow on trees then why do banks have branches?

Because otherwise, the money would just blow away.

So, the branches are kind of like a protective force. Good to know. Why is a square meal served on round plates?

Because food makes the world go round.

Indeed it does! What’s your favourite word?

Sleep is one of my favourites too! What happens if Batman gets bitten by a vampire?

I don’t know go ask Dag I’m sure he would know the answer.

Hopefuly, he also has some suggestions about how to help Batman too, because I don’t imagine that a vampire bite would be much fun. And that’s before any side effects. On the topic of possible monsters and spooky things in the night, what would a monster that you invented look like, and what would you call it?

I mean I did, they were the Bal’lak and Mirral. Ugly things. All over the place in Under A Crimson Sky.

And to meet the Bal’lak and Mirral in action is just another reason why readers should pick up a copy of your novel. For those few who might still be sitting on the fence, can you round out our chat today by sharing your favourite line from A Crimson Sky that might entice a sceptical reader to meet not only the monsters but all of the other sights and sounds that await them in your novel. What’s your suggestion?

The idea that there is always tomorrow to look forward to. Got me through a lot of hard days.

Especially if tomorrow is filled with another book like A Crimson Sky. Brett, thanks so much for sharing some insights into this adventure, and I’m sure we’re enticed a few new readers to take of the adventures themselves today!

Excited to read the book we discussed today? Find it here on Amazon: ‘Under A Crimson Sky ( ASIN: B07GJ8MN1W )‘.

Want to find out more about Brett Currah? Connect here!