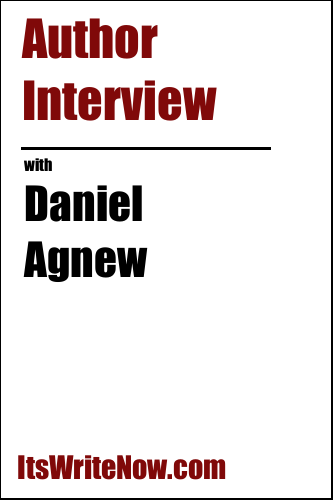 A young priestess flees from Crete to Egypt and finally Canaan as the Bronze Age world collapses around her. Until the skies grew dark and red and the ground shook and cracked, Ariadne’s biggest problems were how to stay one step ahead of her parents and out-think any boys who might come her way. Now she’s part of a desperate plan to bring the world back to balance and save Crete from destruction. Shame for the world Ariadne had other plans.

Will Ariadne have to give her plans to bring the world back into balance? To find out, Daniel Agnew, author of ‘Ariadne’ has kindly joined me today to explore the next steps of this young priestess during this turbulent time. I’m keen to start our exploration at the beginning, so can you share what originally inspired you to bring this story to life Daniel?

I started with the ending. I know a lot of people say this but it did actually come to me in a dream. I was so captivated with it I wondered how the protagonist got then and had to keep writing to figure it all out.

Did you use any experiences from your own life to help you figure it all out?

Partly remembering back to being a child. Most of it was imagined though, inspired from historical research.

And how did the characters come to life in this mix of historical research, dreams and your own life experiences?

I have a habit of accidentally answering these ahead of time, don’t I?

*Laughs* A little, but I’d still love to know more about the layering of these influences to build characters. How did it all fall together?

The protagonist came to me in a dream, as did the final few scenes. As for the others, many are inspired from history, one way or another.

Does this inspiration also energise your writing periods?

Like most writers I think, writing energizes me but editing exhausts me.

Deanamh: it’s Irish for ‘to do’ or ‘to make’. The more you think about it, the cooler it is that those two ideas are connected.

Oh, that really is cool.   Are neat little connections like this one, things that you like to think about as you write, or do you tend to focus on something else?

In the end, I have my brother in mind. I know if he gets it, then at least it makes sense but he’s not shy of giving constructive criticism. I write to him knowing he’ll help keep my course fairly straight.

What course were you trying to charter in this book? What do you hope readers take from the journey?

I wanted to capture what it felt like to be a child before I lost my memory of it. That and, the bronze age is such a cool time period, there’s so much there you had no idea about, go check it out.

There’s so much to learn about the Bronze age! Was learning about this period of history your greatest area of growth you experienced while writing Ariadne?

It’s really hard trying to write a novel, let alone publish it yourself and market it but it’s not impossible and it’s definitely worth it. If you want to do it then start today, and don’t give up. It sounds cliched but it’s the only way you’ll succeed.

It does sound cliched, but it is the truth, so I think the cliche-ness of it can be forgiven. With our minds fully focused on succeeding, have you already started thinking about the next writing project that will help push you closer to writing success?

I’m taking a quick break from Ariadne, historical fiction and the bronze age and giving a sci-fi novella a bit of a go just to clear my head. My next big book will be a sequel to Ariadne though.

Those are two quite different worlds. How has persisting to write in these different areas, and in general helped progress your voice as an author?

Yeah, definitely. I wrote Ariadne over a few years and so comparing the voice of my first few chapters to the last few in the initial draft was really interesting (and a bit embarrassing). Took a decent rewrite to iron it out but I think I’ve ‘found my voice’ a lot more now that I’ve finished it. Still, early days yet.

Has your work on your voice helped you build your own author brand? What steps have you taken so far?

I’ve done a fair bit online with targeted ads to my genre’s audience but I also went out in person and spoke to bookstores. I got 17 stores stocking Ariadne withing 6 months because I wasn’t afraid to ask and I didn’t give up because the odd one said no. That and treat it professionally – if you’re serious, get a good cover for starters.

Even though you shouldn’t judge a book by its cover, it’s much easier to sell to bookstores when it looks awesome. I also love that you were brave enough to go into stores and get your book stocked. Good luck getting those next 17 stockists! For those readers who might be on the fence about getting their own copy of Ariadne, what line from the book can you share with us to get them purchasing a copy today?

‘A crow pecked at a corpse, the corpse of a boy. But it was not one of her boys, so that was alright.’– With this line I was trying to explore not only the horror of war but the natural bias most of us feel for those we love, and the harm such a bias can have of those around us.

Only one line to explore these biases doesn’t really seem enough, so readers should go and pick up a copy of Ariadne and dedicate a little more time to explore the power of biases. Daniel, thank you for dropping around to chat about your historical tale. I hope to see you soon with your upcoming sci-fi adventure!

Excited to read the book we discussed today? Find it here on Amazon: ‘Ariadne ( ASIN: B07DPNTQYC )‘.

Want to find out more about Daniel Agnew? Connect here!