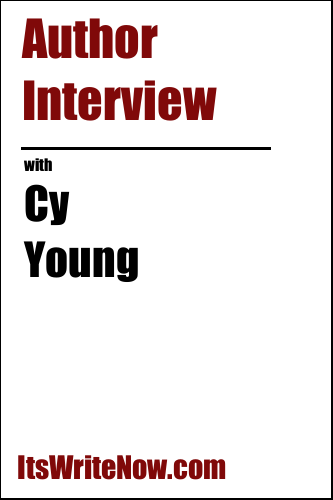 Under the tutelage of senior retired circus performer Sandrine Fuller, a 12-year old misfit Charles Wesley Onions learns to love books, to have a life-goal, and how to play the trumpet. Suddenly a tragic event propels Onions to rise above the chaos and reach a high point he never dreamed he could reach…

What will happen that will help Onions reach for his dreams? To find out, I’ve been joined by the creator of Onions, Cy Young to chat about the adventures of this twelve-year-old misfit and retired circus performer. On first glance, these two seem like an odd pairing. What thoughts lead to the creation of these characters and the world they live in?

It grew out of the character of Sandrine Galano Fuller, an 80-year-old retired circus performer and the idea that she lived in a cottage built by her uncle on a plot of land that included a waterfall that plunged to a pool in her side yard where she bathed each morning at 8:00 a.m. The bubbles from the waterfall, caused by Sandrine using Mister Bubble, play a prominent part in the plot and most importantly, the ending.

Sandrine has nothing but personality! How did such a vivacious character, and her surrounding cast come to life?

Children and young people come easy for me because I’ve often written in the young adult field. I had a show produced in NYC at the Martinique Theater, Aesop’s Fables, writing about animals and kids, which I later performed in schools all over the country. Onions was a natural, a misfit who has withdrawn into himself and loves to lose his misery in comic books. I lost my misery in playing the trumpet and practicing 4 to 6 hours a day.

So, it’s fair to say that your personal experiences, playing the trumpet at least, have helped create the tale, Onions?

Yes. I played the trumpet, beginning when I was 10 years old because I had asthma and the doctor believed playing this instrument would help my breathing. It did. When I reached 16, I was featured on a national radio program, Ted Mack’s show, playing my big bore Benz trumpet.

Wow, that’s awesome! All your practice really did pay off! With so much practice, I’m sure you’ve learnt some important lessons along the way. What was the most important message you wanted to take and share with readers in this novel?

Do you keep this motto in your mind as you write, or do you find your mind focuses on something else?

Only that the writer is simply a scribe, everything’s already been created, including stories. I have only to listen for the direction, and the project unfolds beautifully. No writer’s block here.

Being a scribe as the story follows by sounds like a fantastic way to write and observe. Does this way of writing excite and energise you, or does it get exhausting trying to keep up?

It energizes me. Once in the flow, I can continue for hours and hours.

Looking back, what where did you learn the most from watching this tale unfold over all of those hours?

Developing the relationship between 12-year old Onions and 80-year old Fuller. I infused the lady with much of my own habits and beliefs: for instance, I love succotash, so Ms. Fuller does too. She’s an expert trumpet player, her circus act was playing the horn, and I became pretty good also. I feel I learned much about relationships in delving into these two characters, as well as many of the individuals peopling my narrative. I also learned to persevere, beginning Onions as a screenplay, then adapting it to a novel. This cross breeding helped my synthesize and deepen the relationships.

Oh, I like the idea of cross-breeding stories to make them stronger and deeper. Are you working on any cross-breeding writing projects like this at the moment?

I have 10 screenplays I’m adapting to fiction books. The problem is that these are different genre stories and I know the importance of having multiple books in the same genre. To that end, I have a screenplay in which the lead character is an NFL kicker who is a P.I. in the off-season. The first book will be strong and I think Anthony Scaramuchi, the kicker, will lend himself to a book series (I love football!).

Wow, that’s a lot of adaptations. And I love that you’re already starting to think about grouping them together to help readers. Have these thoughts of working in similar genres helped you build an author brand?

As I said previously, I believe a series of books based on the NFL kicker would establish me in the thriller/P.I. genre. Currently, I’ve just transited from working for 20 years on my children’s crusade musical and it’s taken me some time to change my focus to books.

Would you say that you’ve seen a progression in your voice as an author as you’ve kept writing over the years, and more recently with this change new genres?

I don’t know. That’s subjective. I suppose an objective observer could answer that question. I know I’m turning away from whimsy to a more practical and sometimes brutal reality.

Well, we could turn towards that brutal reality, but instead, let’s detour in the whimsy for a while with a couple of my favourite quickfire questions. And the first fire for today is, if money doesn’t grow on trees then why do banks have branches?

The bank’s branches have withered thanks to Wilson’s creation of the Federal Reserve in 1913. Now we have financial concentration in the hands of a few wealthy bankers.

From bankers to Batman. What happens if Batman gets bitten by a vampire?

It would give Marvel Comics another terrific franchise.

They’re always looking for another one! Can you cry underwater?

Only if a crab is clinging to my toe.

Those pesky crabs! Why is a square meal served on round plates?

To confuse the eater.

Maybe it’s more of a puzzle to get their mind working before their stomachs. You never know, all that confusion might improve digestion. Have you ever been on a literary pilgrimage?

No. Well, I guess you could call my musical, The Children’s Crusade, a literary pilgrimage, as the story follows the children who, in 1212, formed a crusade and marched off into the horizon, never to be heard of again. I have a 22 song score if you want to hear some of the songs. (I have a song on the Streisand Third Album, Draw Me A Circle).

Since we only have a few minutes left to chat today, I’m going to take checking out the song score as homework for our next chat. In the meantime, can you share your favourite word?

Deviation. When I was in fourth grade, I diagramed this word and it’s stuck with me all my life.

I won’t ask what the image was, because I think it takes away a little of the mystery, but no doubt it will pop-up in one of your stories in the future for each and every reader to see. And when they’re seeing that, perhaps they might also see a new monster from your imagination. If you could create your own monster to share with readers, what would we see?

Sounds like we need some hands to go and pin it down. And when we’re putting our hands to good use, which had will we note is your dominant hand?

The right. In the Middle Ages, being left-handed and/or red-headed increased your chances of being burned as a witch.

We’ll have no witch burning here! Instead, let’s ponder any questions that we haven’t answered yet. Do you have any to suggest?

Well … the big question is who are we, why are we in this material form, is there another reality, what is it, and isn’t finding out the answers to these questions the most important goal we can pursue. What is my answer? I believe my goal and answer to this question is revealed in Matthew 17, King James version.

That’s a good answer and I’m glad to see you have a goal in mind. And by getting to this goal, we’ve reached our other goal today, which was to share a taste of Onions with readers. Cy, thanks so much for working towards this goal with me today, and I hope you get closer to all of your writing goals this year.

Want to find out more about cy young? Connect here!