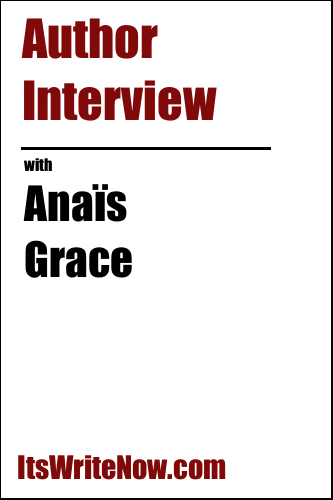 Suppose that patriarchy just never happened. In the Kingdom of Pergamon, ever so long ago: The wacky story of a boy in a woman’s world. Brendan is an object of desire and amusement (nice). But still an object (mrgh). Princess Rose thinks he’s pretty cute. Brendan thinks . . . well, the sorts of things boys think.

Will Brendan’s thoughts lead him to trouble, the Princess or both? To find out a little more about Brendan, and the kingdom he lives in, I’m spending a little time chatting with the author behind the Kingdom of Pergamon, Anaïs Grace. Anaïs, looking back, what inspired you to explore Brendan’s Kingdom?

We’re now seeing a sea change in the balance of power between men and women. What if that change had happened a lot earlier? What if women got to call all the shots? What kind of a society would then have evolved? Sounds like a perfect setup for an alternative history.

Building an alternative history using this setup sounds like fun! As you started the building process, did you find yourself adding in snippets from your own life to texture this society?

I read somewhere that everyone who makes an appearance in your dream is a variant of yourself: the good guys, the bad guys, both genders. So too the novel.

So, how do these variants of personalities form solid characters?

Ahh, keeping the mystery alive. Okay, so let’s change our focus from the nitty gritty to the big picture. What picture did you want readers to be left with once they’ve finished reading this novel?

That the deepest and darkest matters are rife for humorous treatment.

What do you think makes a book deeply satisfying to the reader?

Treatment of a deadly serious matter with at some humor on every single page. Think about Liane Moriarty’s BIG LITTLE LIES or Paul Murray’s SKIPPY DIES: People around you hear you sputtering with suppressed laughter and if they ask you what that funny book is about, you’d have to answer “wife abuse” or “teenage overdose” respectively.

With such respect for the work of other authors, I’m curious to find out if you’ve ever been on a literary pilgrimage?

Yes, I’m following some of the tracks of the French author, Marcel Pagnol.

Do you think about following the tracks of authors like Marcel as you write?

No, I think about making the fingers go faster.

It sounds like your fingers need to go to a finger gym and do some workouts so they’re better prepared for your writing sessions. As you’ve kept up those writing sessions, how do you feel that your voice as an author has changed?

A gradual shift from male to female. Or from somewhat male to somewhat female. You’d have to be asleep in this century not to understand that women are the readers.

What has writing through this gradual shift and in particular this book taught you?

Finding those other 15 books is a great challenge for readers! And while they’re trying to find the pen name for those other books, let’s leave them with a taste of your next book. What can you share about what’s coming up?

A novel about Eve.

Hopefully, we’ll all get to meet Eve soon, but in the meantime, we can all pick up a copy of Princess Absolute, while tracking down the rest of your writing!

Excited to read the book we discussed today? Find it here on Amazon: ‘Princess Absolute: An Alternative History ( ASIN: B07MY35G5D )‘.

Want to find out more about Anaïs Grace? Connect here!