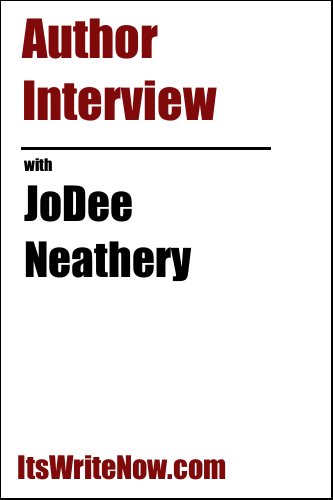 Life in a Box is a character-driven work of literary fiction asking the question, how much would you sacrifice to hide a secret? The answer reveals itself as the protagonist, Andee Camp, inherits a box of family history along with a challenge from her mother to write a novel based on their ancestors. As Andee writes the story of two sets of twins born on the same day, one set in Portland, Oregon, the other set in Amarillo, Texas, the pieces in the complicated puzzle begin to fit together. By the last page readers realize just how much one would sacrifice to hide a secret.

How much would you sacrifice to hide a secret? See how far the secrets take the characters in Life in a Box, author JoDee Neathery and I chat today. JoDee, let’s get our readers situated by revisited the genesis of this novel. How did it all begin?

It began with a life-long dream fueled by encouragement and praise for my writing. Several factors pushed the timeline forward, the most significant, a Stage 4 melanoma diagnosis. I had a story to tell so I best get started. After my parents died I inherited a suitcase full of photographs, yellowed newspaper clippings, and my grandmother’s handwritten journals. The faces and expressions inside this treasure trove of antiquity told the story of our past, making the present more relevant. It was the driving force behind the creation of Life in a Box.

When you got started sorting through the photographs, clippings and other papers did you find events from your own life contributing to the driving force you felt? Is there much of your own story peppered throughout the book?

I have certainly left a piece of myself in the novel. Many of the characters were plucked off my family tree, although the events surrounding them were fictional. The protagonist, Andee Camp, mirrors my own dreams and insecurities. I was born with a love affair with words, possessing a curious mind often observing people and surroundings (not to the stalker stage however..HA) . I love when an author is capable of transporting the reader to places they may never been to meet characters they may or may not ever met…I paid particular attention to that in the novel.

Having several characters based on family, it was beneficial to already know their physical appearances, personalities, quirks, positive and negative features, etc…I received a huge compliment from one of my childhood friends who commented that while she was reading the book, she could hear my mother’s voice and laugh…warmed my heart. Another close friend commented on the character based on my Dad saying I nailed his sense of humor…it was legendary to all who knew him…I spent a great deal of my childhood giggling!

Were you always thinking about your childhood memories to keep yourself giggling as you wrote?

In the back of my mind is always my family – my grandmother in particular. She was quite a character and I always enjoyed her stories…another one with a wicked sense of humor. She would delight in turning my buttoned-up formal grandfather into a crimson-faced lad with her antics.

Good on her! We all need a little antics in our lives. Does reflecting on the past antics and family members help energise your writing, or does it get a bit overwhelming at times?

Both. Someone asked me if there was a secret to writing and I said, for me it’s insomnia and discipline. I keep a notebook on the nightstand and often jot notes in the middle of the night…my thoughts and ideas seem to flourish when I’m supposed to be sleeping.

Maybe you don’t know the secret to sleep, but it sounds like you have a solid grasp on the secrets of writing. And one secret I want to know more about it what Life in a Box really means. What can you share?

I’m often asked what the title Life in a Box means. The literal meaning resulted from that suitcase full of “family.” But (as an only child) I wanted to tell a story about life inside a box, the one I was most personally familiar with – the one that shelters you from failure. It also details the freedom of being outside the box that comes with fearless confidence.

Is the importance of freedom and fearless confidence the central ideas you wanted to share in this book or was there a message greater than this?

Dreamers are often linked with irresponsibility but as Oscar Wilde said, ” A dreamer is one who can only find his way by moonlight and his punishment is that he sees the dawn before the rest of the world.” Not blessed with a writing pedigree, I would encourage anyone who is reluctant to follow their dream to remember who you were before the world told you who you should be and to ignore those who say you are too young or too old to try.

By following your own advice and pursuing your own dream, do you feel that you’ve seen progress in your voice as a writer?

Yes, I think I have polished the voice some more as I have become more assured of what I am doing. I think my writing has reflected that.

What have you taken away from this practice of continual skill building in the writing domain?

I learned to believe in myself and that I could do this. I faced a lot of obstacles with grace and determination but never lost sight of the end goal. When I typed The End to the manuscript, I fell apart…the emotion of that moment was surreal. When the proof copy arrived, I almost tackled the poor UPS driver. It’s pure joy for me to share my story with others and I actively promote my novel to anyone who will listen!

Has this desire to actively promote your novel to anyone who will listen translated into the creation of an author brand? Are you branding your work?

Not consciously but I feel I have a certain style that taps into my descriptive writing style alongside a subtle sense of wit. I love finding new ways to say something ordinary.

Are you working on any new work that helps you explore new ways to say something ordinary?

I currently have a byline in a local newspaper – Back Porch Musings, a lighthearted look at life in general. I am the chair of our 83 member book club and I write minutes and reviews monthly. I am in the process of writing another novel (not a sequel) titled, A Kind of Hush which explores when the line blurs between family and justice. A family of 4 is enjoying a summer outing when tragedy strikes. One parent survives along with a teenage daughter and their seven-year-old son found hiding in the woods. The question lingers was this a tragic accident or something more heinous – and if so, “whodunit” and “whydunit.”

Oooh, we all love a whodunit! Since we’ll just spoil ourselves if we dig into the whodunit, let’s instead move our questioning to some of our fun questions, formulated to show our readers a taste of what’s in the mind behind the books. Let’s start simple, what is your favourite word?

Good start. How about, if space is a vacuum, who changes the bags?

Me too! Can you cry underwater?

I can cry anywhere…cry me a river I can do.

From rivers to trees, if money doesn’t grow on trees then why do banks have branches?

What do you mean? We had a money tree in our backyard…or so my Dad used to point out.

Imagine a future when you could no longer write. What would you do?

We’re not at that future today, so let’s have some fun creating things! If you invented a monster what would it look like and what would you call it?

It would have to be a sweet monster – I’m easily frightened. Her name would be Lovey, a hot-pink blob of bubble-gum with soft brown eyes and long eyelashes who loved to romp in the ocean, lived in an artichoke orchard in California with an imaginary friend named Hilda-Hatter-Otter whom she was teaching to read.

Now that sounds like your next book! And perhaps she could have some new friends. What new animal could you create to join her by mixing a few existing animals together?

A squirrel and a poodle – we would have a Squirreladoodle – a curly-haired species who darts around like it’s the beginning of a brand new day every second.

I want one of those! What makes you laugh/cry?

I love to laugh…mostly silly stuff tickles my fancy. I tear up at the National Anthem so I cry easily…it’s good for the soul…without tears we have no emotion and I don’t think a writer can exist without emotion – happy or sad.

Emotion is so important to writers. Can you share a taste of emotion from Life in a Box with our readers to round out our interview for today?

“God is an Indian-giver,” yelled Will as he strode to the sunflower-draped coffin of his twin sister. “You said Joanna means a gift from God. Well, how can He give her to us and then take her back? That’s not fair.”

Wow, that’s a lot of emotion there that just leads into so many more questions that can only be answered by picking up a copy of Life in a Box. JoDee, thanks for sharing a taste of life in that box, and I can’t want to see what other stories might be hiding in that box in the future!

Want to find out more about JoDee Neathery? Connect here!