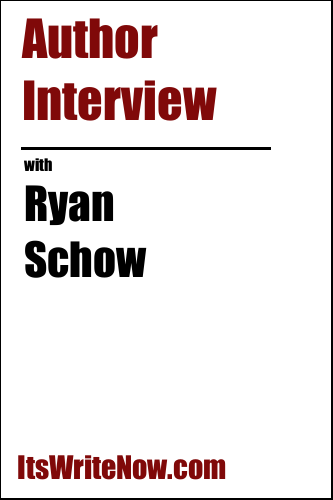 A savage attack. Society at the end of its rope. The most dangerous city in America is now caught in an extinction-level event. Is the assault on Chicago a facet of military tech gone awry, or does this sudden spasm of violence signal a darker, more ominous future? In The Age of Embers, several paths will collide in the center of a post-apocalyptic nightmare of epic proportions.

Will society fall apart now that it is at the end of its rope? To find out, Ryan Schow, the mind behind ‘Age of Embers’ has kindly joined me today to chat about the immediate further for the most dangerous city in America. Ryan, looking back, what inspired you to write this post-apocalyptic tale of an American city?

I started studying Artificial Intelligence (AI) a few years back and ended up writing a wildly successful series, The Last War Series, about AI waging war on mankind for dominance of the earth. From this series, and a massive pleading for more, I started this new series as a stand-alone series inside The Last War universe. If I was to point to one or two things that influenced this series, I’d say The Terminator. That movie scared me as a kid, so I think some of that comes through. And of course, I loved Escape from NY, so this seemed like a good fit for a book.

It sounds like a great combination of inspiration to me. Did you find it was important to mix your own life experiences, other of course than watching The Terminator, into your inspiration pot to make it feel a little more real?

I would say I’ve read a lot of boring books with two-dimensional characters, and I’ve watched a lot of terrible movies. From there, you learn what not to do, and that’s what happened in these books. I read a lot of bad Post-Apocalyptic fiction, and some VERY good PA, and found my way to an amazing series. Like anyone else, I want to be properly entertained! So when that happens, I ask why and then I duplicate.

Can you explain how this duplication process works for you when you did things like developing the characters?

I start with names I like – Carver Gamble, Fiyero “Fire” Dimas, Eliana Gutierrez – then I find models on Pinterest that feel like them and that gives me my reference points for a physical appearance. From there I decide who I want them to be, what their strengths are, where they are weak, what their fatal flaws are, and then what they want that they aren’t getting. From there they begin to flesh themselves out on their own inside the book.

So you’re heavily focused on them as you’re immersed in writing the book?

Do you find yourself being overwhelmed or energised when you’re living inside the heads of your characters?

Energized!!! There is nothing more exciting for me than creating a great story, so this is what I do full time and I’m in love with my life right now. It hasn’t always been this way, but after writing for 20 years and only finding some great success in this last 14 months, every day is a great day.

Are you still learning new things about writing after 20 years?

This is my 17th book so this book just came together so easily. I’ve found that writing groove where I can crank out a 450 page book in a month and feel like I’ve had a ton of fun writing it.

That’s a phenomenal pace! When you’re going so fast do you find that you’re still finding time to share important messages through your work? For example, what’s the message that you wanted to share in this book?

You never know who you are until you’re pushed too far, and only then will you find out what it feels like to be ten feet tall and bad to the bone. LOL

*Laughs* I’d like to try out that feeling for a week, I think I’d enjoy it too! Do you think your voice as an author has improved or changed through the years as you’ve pushed yourself to keep meeting and moulding new characters in gripping tales?

They say you have to write a million words to find your voice, and though I always thought that was maybe an exaggeration, I now believe there is truth to that. We are influenced so much by who we read, that we can carry their voice into our work, but after a million words, you do indeed find your voice and that’s a beautiful thing.

It really is. Have you done additional things in the branding space to support the strength of your now refined voice?

I brand my books through cover unification, and of course by creating a full series. I also have an incredible group of readers on Facebook that I interact with daily. They are great in giving me ideas they want to see in the next books, and I implement a lot of this in my work and as a result they are happier and they spread the word about my books. I think that would qualify as branding to some degree…

Sounds like a great exploration of branding to me! One way I like to explore branding is to play with ideas and see what sticks, and a great way I like to do this is by challenging people to think outside the square. Let’s see if we can get our minds moving with some off-beat questions like if space is a vacuum, who changes the bags?

As opposed to the successful Darth Vader? With dark dudes with interesting wardrobe choices on our mind, what do you think happens if Batman gets bitten by a vampire?

He bites back twice as hard. He’s Batman.

Works for me! If you could breed two animals together to what new animal would you create?

A frog and a donkey, just because…

Interesting mix. I would how high it could jump. Perhaps something to explore in an upcoming book! If money doesn’t grow on trees then why do banks have branches?

To confuse the nuts.

*Laughs* Why is a square meal served on round plates?

To drive you forking crazy.

*Laughs* You’ve got this comedy thing nailed! Will the next answer be as funny? Let’s see with, what is your favourite word?

Is there a no swearing clause?

Depends how bad the swears are. How about we don’t lose the younger ones in the audience, by moving back to your expertise in monsters. What would a new monster you created look like, and what would it be called?

It would be an AI beast and I’d call it The Silver Queen, spoiler alert…

Oooh, spoilers! We can’t spoil your work for everyone, so instead let’s give them something to look foward to. What book or books are you writing at the moment, and what can readers who have encoutered The Silver Queen get their hands on soon?

Working on the next four books in this series. The next book is The Age of Hysteria, and that will be out on April 10, so I’m back in writing mode!

Awesome! With so many words to write we know your writing mode it pretty intense, so I’ll let you return to your words so we can see those new books hit the shelves as soon as possible!   Ryan, thanks for sharing a taste of your journey to The Age of Embers, and I can’t wait to hear more about the next million words that you’re writing.

Want to find out more about Ryan Schow? Connect here!