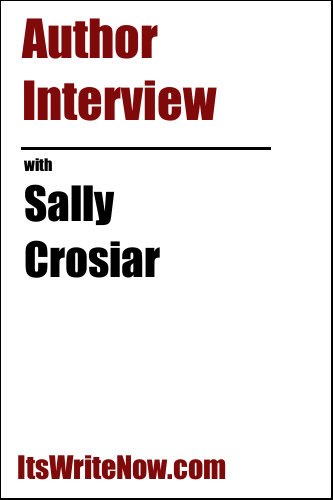 Vi Masters wonders…can you come home again? More, she wonders why anyone would want to. She fled upright, backwater Freedom, Iowa at seventeen and hoped never to return. But this time, she can’t stand up against the pleas of the aunt who raised her. It’s one weekend. How bad can three days be? Three measly days in a wonderful eighteen-year marriage – that’s what Vi’s stepmother hopes. But what if Ben discovers Tammy knew why his daughter ran away – something he seems determined to finally find out? She can’t be sure Ben would forgive her, and that’s got Tammy scared to her bones.

Can you come home again? Perhaps not, but you can come back to ItsWriteNow.com, and Sally Crosiar, the author of Come Back has done just that today by returning to chat about her book. Sally, it’s great to see you back again, what’s been going on since we last caught up?

I’m so pleased with the response to COME BACK that I’ve pushed revisions on HOME PLACE, my second novel. Halfway through draft #2, I’m ahead of schedule and aiming at publication in 2020.

And since meeting with book clubs is so hot-diggety fun, I developed a Book Club Discussion Guide for COME BACK. Find questions at https://healthypeoplelearn.wordpress.com/2018/11/13/discussion-questions-for-book-clubs/

My my, you have been busy! Has your approach to writing chnaged since you’ve kept continuing down the writing path?

I used to dread revisions. Now I rather like the process. Go figure!

Let’s chat a little more about that process that led to Come Back. For readers who haven’t heard of your work before, can you set the scene around how Come Back came to life?

My writers group accepted a challenge to write from the same prompt. It would be a spoiler if I told you what the prompt was, so I’ll keep that under my hat. But the characters in that little story wouldn’t let me go. How did they get where they were? And what would happen to them when they left that life? Vi’s story came from those questions. She goes back to where it all began and finds yet another new path to follow.

Are any of the events that Vi experiences on her journey drawn or inspired from your own life?

I’ve been a lot luckier than Vi, so her history is not mine. But the small town of Freedom, Iowa is a carbon copy of the town nearest the farm where I grew up and much like other towns where I’ve lived. I have breakfast nearly every Sunday at a diner like the Pinewood with its cast of regulars, and did my first public speaking at a community center like the one where Vi performs at her aunt’s party, complete with the sea of green floor tiles.

Tell us a little more about the lives that are led in the world of sea green floor tiles. And how did they evolve?

I started with Vi, where she’d been, where she was now, where she might go next. The other characters filled in as catalysts and roadblocks for Vi. Only a few supporting characters were inspired by real-life people. Sadie is a blend of a woman I saw wearing a cheer-leading costume and my mom in her last years – both rather dotty but so loving. Connie was based on a flight attendant who took the stage and ‘worked the room’ when the plane I was on got delayed on the runway. And I know a talented theatrical guy much like Jerome. I loved how Jerome helped Vi see that the backwater town she fled at seventeen was populated by smarter and more sophisticated people than she realized. I suspect that’s true in most towns, big or small.

Was the idea that people are more sophisticated than you think the main message you wanted to share or was there another one that you felt was stronger?

Hope takes courage. I didn’t start out to write a story about hope, but the risk and scariness of hope kept coming up for Vi. And it made me consider hope and courage from a different perspective as well as how bleak life could be if one did not muster the courage to hope.

Did you keep thinking of hope and courage as you wrote, or were your thoughts fixated elsewhere?

Characters aren’t just in my mind. They take over my whole being.

Is that exhausting or energising?

Yes to both. It’s the scenes that play in my head at 3AM that exhausts me most. Reading said scene three months later and finding it sucks less than I thought? That’s energizing.

Is realizing how much you don’t suck the greatest thing that you learnt from getting this book to publication?

Oh boy. How long have you got? This was my first foray into fiction, so the learning was intense. I suppose more than anything, I was hit over the head with the fact that people act the way they do for a reason. My job as a novelist was to uncover those reasons. And I learned that while I needed to know the tiniest details about my characters, readers wouldn’t. I had to remember that readers would likely enjoy trying to figure out the reasons behind characters’ behaviors, so I should hint, but not give too much away. (This partly explains why the book is fifty pages shorter than the first draft!)

*Laughs* I’m glad you’re giving the readers the ability to see a little mystery in your book, it makes it so much more fun to read! And once readers have worked through all of the fun in Come Home, they can pick up a copy of Home Place in 2020, right?

HOME PLACE will be my second novel. Last time we talked, the characters kept going off on tangents, but they’re (mostly) reined in now, so I know how the story turns out. But of course I can’t divulge. Will Kat Patterson keep her home from becoming a golf-course as my family’s farm did? Find out in 2020!

2020 seems like such a long way away to wait, but it’s great that see your dedication to building your brand as an author by continuing the journey. Has your journey as an author led you to new communication channels recently to build your author brand?

Readers can find the details about how to tune into Sally’s bat channel after the interview, but before readers rush off to check out her awesome signalling, I have to ask you your opinion about the great Batman himself. What do you think would happen if he got bitten by a vampire?

He bites back? That’s what I’d do if I were Batman. Or if Batman was a woman.

I’d do the same thing, so I think it’s a good strategy for him to try. You never know the vampire might end up with awesome bat powers too! Sally, thanks so much for returning to update myself and readers about Come Home, and we’ll be looking forward to your upcoming book in 2020!

Excited to read the book we discussed today? Find it here on Amazon: ‘Come Back ( ASIN: B075RR8TGS )‘.

Want to find out more about Sally Crosiar? Connect here!