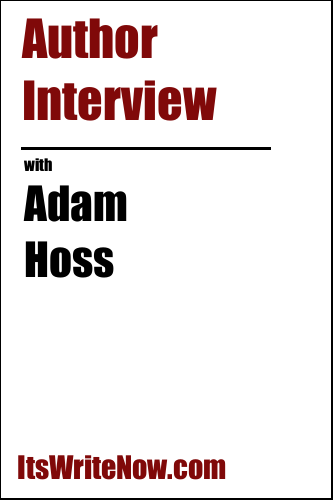 One Hundred Below is a murder mystery set at a research station in Antarctica. Haunted by a traumatic past, Dylan Alvarez seeks a fresh start at Sputnik Station, a research facility held up as a model of international cooperation. But when a renowned station scientist is found murdered, long-buried tensions erupt at this microcosm of humanity at the bottom of the world. Professor Ariel Zwicky was found dead after her unauthorized digs in the ice came to light. What was she looking for that led to her murder? As suspicion falls on Dylan, he finds himself plunged into a web of conspiracies and power struggles at the isolated station with the darkness of polar night closing in.

Will Dylan be able to clear his name, or will he be caught in the darkness and isolation of this remote base? To guide us through this ice-cold murder mystery, Adam Hoss, the author of ‘One Hundred Below’ has dropped into ItsWriteNow.com to chat. Adam, I love the idea of an Antarctic murder mystery, can you share what initially sparked your own interest in a fictional murder in this area of the world?

This novel actually came out of the struggle to find a title for my first book, Infinity Point. I was deep in a YouTube rabbit hole around 3 a.m. when I came across a documentary about Vostok Station, a Russian research facility where the world’s coldest temperature was recorded. The word “Vostok” is evocative and mysterious. I imagined a mystery novel titled “Vostok Noir,” and the idea just grew from there.

Were there events in your own life that help this idea get traction and grow?

Sadly, no! The NSF sponsors an Artists & Writers Program for authors like me working on books set in Antarctica. Unfortunately, with the opposite seasons of the southern hemisphere, the only time I could go would be the middle of the school year, and for a teacher like me that’s simply not an option.

That’s a shame, but hopefully, you can make it an option one day in the future. Since you haven’t been to Antarctica, how did you start to build the cast of characters that inhabit this world?

I spend lots of time browsing profile pictures on social media. I’m a creeper like that. Every time I come across someone quirky or unusual, or who just looks like “a character,” so to speak, I file that face away in the mad scientist lair of my brain.

A character bank is an awesome idea! What do you do when you’re writing to bring this bank to life?

I really try to immerse myself in the story world. I imagine myself as the character, in the setting. Sometimes I’ll take a walk in character, or with a character, just to brainstorm how the protagonist might react to the world. You know, just a grown adult going for a walk with his imaginary friend. Some days I’m not sure if I’m crazy or just a writer.

Do you find a way of developing and interacting with your characters to give you more energy to write, or does this process of creation just get a bit much?

I suppose I may be the polar opposite of many writers in this regard, but writing a first draft exhausts me, whereas revising fills me with energy. It’s during the revising process, when I finally have a sense of the shape of the story, when a story starts to become art.

What’s the sense of story that you really hope readers take away from this book?

It’s really a story about mental illness and trauma. Sputnik Station, as a whole, is a metaphor for Dylan’s own mental unrest and anxieties. It’s a very 21st century type of isolation endured at Sputnik, with many displaced people looking for a homeland. Against this backdrop, Dylan’s fragile psyche begins to unravel.

Oh, I think we need to stop there because I can see your next sentence is going to be a good one and we can’t give too much away too soon! Instead, let’s change topics to something safer. What’s your favourite word?

I put way more thought into this question than I’m comfortable admitting. After long contemplation, I’ll go with “lugubrious.”

Now that’s a word you just don’t hear every day. Can you continue this unexpected exploration, by sharing the new animal would you create if you could cross two existing animals together?

Did you know that a polar bear crossbred with a grizzly is called a pizzly? That doesn’t really answer the question. This is why I can’t do sci-fi or fantasy. I’m too intrigued by the world we live in.

It doesn’t really answer the question, but now you’ve intrigued me and I want to meet a pizzly! The world really is a very interesting place! For readers like myself who agree, what corner of the world will you be exploring in your next book?

I’m working on the first book of a mystery series surrounding rare books. The protagonist is a modern day book hunter in search of lost manuscripts and valuable first editions. It’s a crime series, so each story will feature a mystery to be solved.

More mysteries! I never like delving into a good mystery too early so we’ll wrap up our chat here, but I’d love to hear from you again soon when you can give us a taste of the new series. Adam, thanks for chatting and sharing your love of writing with myself and the readers today.

Excited to read the book we discussed today? Find it here on Amazon: ‘One Hundred Below ( ASIN: B07P38YYK6 )‘.

Want to find out more about Adam Hoss? Connect here!