The Heretic’s Guide to Homecoming (Book One: Theory) 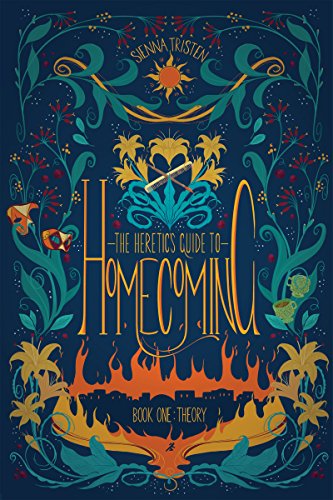 WINNER OF THE 2019 READERVIEWS AWARD FOR FANTASY!

FINALIST FOR THE WISHING SHELF AWARDS!

“Life is transformation. You change or you die.”

Ashamed of his past and overwhelmed by his future, Ronoah Genoveffa Elizzi-denna Pilanovani feels too small for his own name. After a graceless exit from his homeland in the Acharrioni desert, his anxiety has sabotaged every attempt at redemption. Asides from a fiery devotion to his godling, the one piece of home he brought with him, he has nothing.

That is, until he meets Reilin. Beguiling, bewildering Reilin, who whisks Ronoah up into a cross-continental pilgrimage to the most sacred place on the planet. The people they encounter on the way—children of the sea, a priestess and her band of storytellers, the lonely ghosts of monsters—are grim and whimsical in equal measure. Each has their part to play in rewriting Ronoah’s personal narrative.

One part fantasy travelogue, one part emotional underworld journey, The Heretic’s Guide to Homecoming is a sumptuous, slow-burning story about stories and the way they shape our lives.