Made in America: A Memoir of Complete and Utter Stupidity 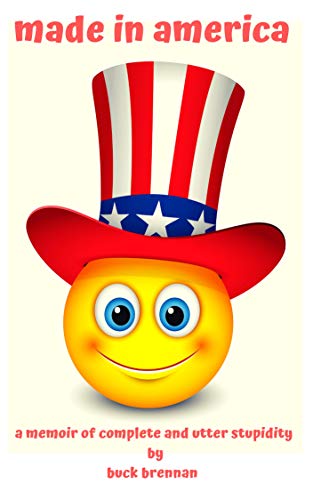 Made in America is the vivid, heartbreaking, and harrowing true story that explores the depths of what life is like when you are a stupid asshole. Buck Brennan always knew he was different. He spent his whole life living a lie, the same way gay kids do before they tell everyone that they are gay. He spent his whole childhood trying to fit in and do things other normal kids would do like have manners, chew with their mouth closed, and not pee all over the toilet seat, but it never felt natural to Buck. Deep down inside he had this burning desire to talk during movies, wipe boogies on the couch, put empty milk cartons back in the fridge, and squeeze the toothpaste from the top. Often times he would find himself just staring off into the distance of a Wal-Mart parking lot, longing for the day when he would be old enough to drive so that he could take up two spaces.
By the time Buck was 11 years old he had a paper route, and every day on that paper route he would forget to give papers to some houses, then give other houses two papers by mistake. Other times he would just say, “fuck it” altogether and throw all the papers off the side of a bank so he could go home and play Nintendo. A week before his 12th birthday Buck was fired and replaced by Phil Buckley, a more competent and reliable 11-year-old who lived down the street. That was 30 years ago.