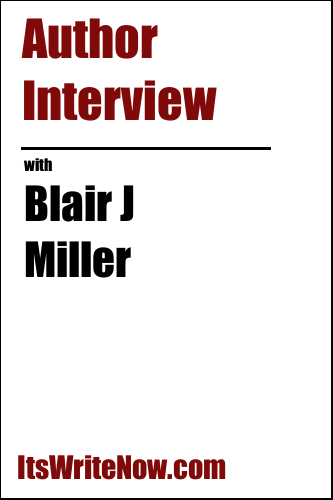 In Korvana, ancient daemons run rampant, spreading death and terror across the continent. Only the pistol warlocks hold them at bay; gunslingers able to summon lightning at the pull of a trigger, or trap a daemon’s essence with a single word.

Temperance Whiteoak, granddaughter of the famous pistol warlock ‘Brimstone’, travels across the continent, capturing daemons and looking for clues behind her family’s murder. In this debut story, she finds herself assisting with the transport of a dangerous criminal sorcerer. What should have been an easy mission quickly becomes far more than Miss Whiteoak had bargained for. It will take all of her wits, and her bullets, to survive.

Will wits and bullets be enough for Miss Whiteoak to survive the perils of ‘Bulletproof Witch: The Delivery of Flesh’? Blair J Miller, the author behind this daemon filled adventure has dropped into ItsWriteNow.com to chat the terror that awaits readers. Blair, let’s centre our thinking on this tale by going back to the beginning. How did this tale come to you?

It started from a combination of fanfiction and a tumblr post, actually. I had been working on a unique story set in Stephen King’s Dark Tower universe but had been wanting to do something more original. While working on that, I saw a post where someone was joking that “cowboys were just wizards that only knew one spell – bullet”. Immediately a story idea exploded in my head of a world where cowboys didn’t just know one “spell”, but hundred, where bullets could turn into fiery dragons or create walls of earth, where magic might be needed to combat a powerful new foe. The story was simple after that.

Cowboys knowing lots of spells is an awesome idea. Were you a little overwhelmed by taking such a big idea head on? Did you find yourself energised to keep writing to extend this idea, or did you get a little exhausted and tired by the scope of the exploration?

Both? I love writing, and mostly got into this as a hobby. When I’m actually writing it’s a blast, and I usually feel energized afterwards. Once I stop writing for a while though, I start to worry about the words I’ve put down, and if I’m not careful I’ll start obsessing over them, going over paragraphs again and again trying to get the words JUST right. That wears down my mental stamina pretty quick, not to mention frustrates everyone who has to be around me while I complain about a word not being in the right place.

Do you feel that you’re getting more words in the write places sooner as you keep up the writing practice?

My writing has gotten cleaner (at least, I hope). My early books were much more rambling, and tended to forget important things like internal dialogue. I’ve gotten much better in the last year or two with writing things that actually sound like I expect them to when I read them back.

What was the main message of this book that you hope clearly comes out when you read this book back?

Originally I wanted to show a revenge story at its heart. The character of Temperance Whiteoak needed to be tough as nails, so it couldn’t be something mild. The more I developed her own backstory though, the more I realized that it wasn’t just about revenge. It was about this character learning that the world wasn’t as simple as she might want it to be, and that everyone has different faces they show to different people.

For Temperance, it was all about learning about how people show different parts of themselves to different people. What do you feel that you learnt?

I really got a good idea about learning the sweet spot for the right amount of information to give to a reader. This was a very tight story, and knowing that I needed to spread certain facts out over eight books, I had to be careful to only give just enough so that the reader wasn’t lost, and withhold enough that (hopefully) they wanted to come back for more.

I’m sure you’ll have readers coming back for more! And when they do come, what new tales do you have to offer them. Do you have many new projects coming soon?

I have two or three writing projects ongoing at any given time. Obviously finishing the rest of my Bulletproof Witch series is my top priority, and I’m currently about halfway done with book three (due out in October). I also have a xianxia-inspired series I’m working on, with the first book hopefully out late 2020. That one is set in a world that is 98% water, where magic is not just some background addition, but is crucial to the very survival of humanity!

Oh, very exciting, I can’t wait to hear more about it! But until it’s ready, let’s hear one final thing from this book. Can you share your favourite line from the novel to round out our interview?

Is that trying to say the person should clean themselves up? You know what, don’t tell us, instead we’re going to have to read all about it in Bulletproof Witch: The Delivery of Flesh. Blair, thanks again for sharing your work today, and I hope to hear more about the next stage of the series soon.

Excited to read the book we discussed today? Find it here on Amazon: ‘Bulletproof Witch: The Delivery of Flesh ( ASIN: B07JLDPZM7 )‘.