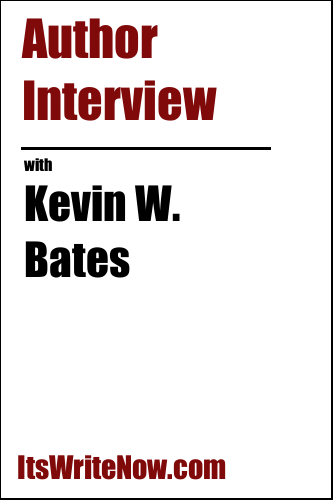 In 2057 amid rampant violence, the U.S. is on the verge of war with the Lost Land. Determined to destroy the Lost Land situated in the Great Basin of the Rocky Mountains, U.S. President Amos Carpenter closes the border and hatches a secret plot to nuke the Landers into submission. But Peter Gillen and Rose Horne are determined to reach the Lost Land. With official border crossings sealed, their only hope is an overland trek through the Rocky Mountains where roving gangs hunt “crossers” like them for sport. When private BT O’Connell, Rose’s lost love, is sent to the Land as part of an invading force Rose, BT and Peter are caught up in the President’s plot and alone stand between the Lost Land and nuclear Armageddon.

Will the crossers, private BT O’Connell, Rose and Peter, be able to reach the Lost Land or will the be caught up in the President’s plot? Kevin W. Bates, author of Crossing the Border will introduce us to the world of the crossers and the Lost Land in today’s interview. Kevin, I’m curious to find out how you came up with the idea for this book. How did it all begin?

I’ve always had a love/hate relationship with apocalyptic and post-apocalyptic books. This book started when I was looking at that relationship. I had an image of the end of the world in nuclear annihilation. What could trigger that event and what if a sanctuary existed where the effects would not be felt? Then I played with that because I have also been fascinated by unintended consequences. So what if the sanctuary and the destruction were linked in ways the characters couldn’t foresee? That seemed interesting to me.

Tell us more about how the characters that live in this interesting world came to life.

I started writing this book in 1999. Three chapters in, life pulled me away from the work. I only returned to it when I retired from my law practice. That’s a long way of saying that for a couple of the characters, I have no recollection as to how they came to be. For the rest–they just appeared. They would usually show up as a line of dialogue, internal or external and expand from there. This can present a problem because sometimes a character who appears will try to take over. That lead to one of the weaknesses of this book. (I know, I know this is a marketing piece and I’m not supposed to acknowledge any weakness in my work. So, call me crazy). Two of the characters kind of took over which lead me to have to juggle quite a bit to make sure everyone received the attention they deserved. I have to say that coming up with characters and defining them was one of the most fun aspects of writing my book.

Creating characters was the most fun, so what was the most important thing you wanted to come from this book?

In my view the book’s theme is redemption. At times I have thought that to be a universal theme because as characters change they leave behind their former selves and overcome obstacles. So, the most important thing I wanted to say is that people can change. I had a friend once who told me that in his view the sum of our vices is a constant. In other words if we improve in one area some other part of our character will deteriorate. That’s a funny, but really sad and hopeless view of life and I reject it. I wanted to tangibly represent that rejection in my book.

Okay, so your work rejects those life experiences around the sum of vices. What kinds of experiences from your life do you feel that this book tries to accept and promote?

I love to backpack and have recently taken that hobby back up after a many year hiatus. The last two years one of my daughters (she’s thirty-two) and I have spent a week backpacking in the High Unitas. Those experiences made it into the book.

Has your love of backpacking taken the form of a literary pilgrimage yet?

What’s that? Is that like traveling to see an author’s home or where a book was set? If so, then I have been on those only accidentally. In London a few years ago we visited King’s Cross railway station and saw platform 9 and 3/4. On that same trip we visited Jane Austin’s home and Stratford-upon-Avon. The little B&B we stayed at in Stratford was gorgeous by the way. Vacationing in England’s Lake District we were hiking and happened across something relating to Beatrix Potter. I don’t even remember what it was exactly, a cottage, I think. This doesn’t count as literary, but when we visited Cornwall I insisted that we stay in Port Isaac a little fishing hamlet on the west coast that was where Doc Marten was shot. That’s a British TV show about a doctor in a small town. It was called Portwenn in the show.

Ahhh, yes the colourful life of Portwenn, I know it well. You know I think we need to add a touch of colour to our interview, so let’s change pace with a few quirkier questions like, if money doesn’t grow on trees then why do banks have branches?

I’m glad to hear that there’s no lack of hope. Why is a square meal served on round plates?

And probably tease little people’s minds too. What is your favourite word?

Susurrus or mellifluous or gloaming. I know it’s more than one–see the answer to meals and plates above.

If you could create any new animals by melding two existing ones together, what would you make?

A Liaphant (Lion and Elephant). Seriously, can you imagine that roar?

It would be awesome! Definitely, something that you would take note of and learn from it you heard it on the plains. When I think of learning experiences, I like to find out about how we all got here. What did you learn from this book that has brought you here today?

Did you find the challenge to learn just about everything exhausting, or did it keep you energised and full of beans?

It depends on the day. Most days writing energizes me. Occasionally I have to force myself to the keyboard. When I was younger (and still sometimes today) when I read a book (science fiction being my genre of choice) the world would fade away and I was in the story. I find myself similarly immersed when I write–everything comes alive and I’m right there. I love that feeling and frankly its the biggest reason I keep writing. I’m trying to develop my craft so I can deliver that experience to my readers.

What are you thinking about as you’re deep in the depths of writing trying to deliver that experience?

I don’t really have anyone in mind. I write what I enjoy and hope that other people might share that joy.

Do you feel that your voice as an author has changed as you’ve spent more time learning how to deliver joy through writing?

I have no idea. Voice is such a tricky thing to me. In writing classes sometimes we’re told that our voices are unique and what define us as authors–it’s who we are in essence. At the same time we’re told that readers want to read books with interesting, fresh voices. So, is voice something inherent that continued writing brings out like Michelangelo discovering his sculptures in the marble or is it something manufactured to attract an audience? I don’t think my voice has yet been fully revealed. I hope that in time it will completely emerge and not drive away readers when it does.

I’ve found some writers have refined their author voice by creating a clear author brand. Have you thought about creating a brand around your own work?

Nope. That is–no I have not consciously thought about creating my own author brand. Probably a mistake, I know, but not the first or the biggest one I’ve made in my life. What was the biggest one? You don’t get to know that. If you’re really interested I’ll put it in a letter to be published when I die.

I’d rather that you’d publish a sequel to this book. Could we perhaps see a new book in that vein in the near future?

I am currently working on the second book in my Artifact series. The first book in that series (Prospector’s Run) was published at the end of April 2019. I’m about two-thirds finished with a first draft of that one.

That’s very exciting progress! We’re going to have to leave our chat here today so that you can go and get that last third done, but before you go can you share a taste of Crossing the Border to get readers hooked?

“We’re all broken….But all of us, even you, no matter what you think, can be mended, put back together as if the fractures had never happened.”

Awesome message. Kevin, thanks for sharing your love of writing with us today, and I hope you’ll come back soon to share your next instalment in the series.

Excited to read the book we discussed today? Find it here on Amazon: ‘Crossing the Border ( ASIN: B07BSV95DL )‘.