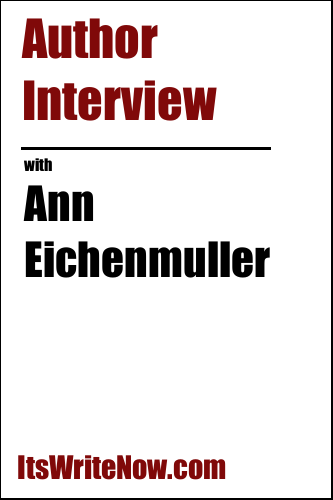 Sandi Beck, who works as a personal advocate, agrees to help an elderly woman stop the development of wetlands near her home, a task that pits her against an influential southern family and a billionaire real estate mogul. In the process, Sandi uncovers some irregularities in the death of the family’s patriarch and is approached by a young graduate student who believes that same man had information about her missing past. The key to both mysteries can be traced to three pages torn from a Civil War diary, but as she untangles 150 years of lies, Sandi is faced with a choice–pursue the truth at any cost, or protect her life and the life of her client?

Will Sandi choose to accept the price of truth, or will she protect life instead? To explore the complexities of the tale around Sandi’s choice, I’ve been joined by Ann Eichenmuller, author of the novel ‘The Lies We Are’. Sandi, can you kick off our chat today by setting up how Sandi’s world came to life?

The seed came from a conversation with a local woman who found an old Civil War diary when cleaning out her great-grandmother’s attic. It belonged to one of her ancestors, who was in her twenties at the time of the war, and told the story of taking her two nieces and hiding in the woods from Union raiders while she was pregnant. It just seemed like a great place to start a story.

Oh, that is a great place to start a story! Do we get to directly meet the woman and her nieces in your book, or did your characters come to life in a different way?

My characters are bits and pieces of people I’ve known, blended together to create someone new. For example, Sandi has a little bit of my daughter in her, and a little bit of other strong and compassionate women I’ve known. I don’t ever take someone from “real life” and put them in a novel, though I did have two ladies tell me once they recognized the librarian in this book, and swore I described him perfectly. I never met the man, never even heard his name, but I loved that my character was so real to them.

*Laughs* Now that’s when you can tell that you did a fantastic job with your characterisations! So, you didn’t add the librarian straight from your life into the book. But are there elements of your life that pop up in the pages?

My heroine is unusual. She lives aboard a sailboat, where she moved when her husband died suddenly when they were both in their early thirties. She did it to escape her grief, but it ended up being a healing environment for her. I am an avid sailor, and my husband and I lived aboard our sailboat for eight years in Maryland while we were working on the renovation of an 1886 farmhouse we bought in Virginia. I came to really love the simplicity and peace of that existence, and I think you see that same feeling in Sandi.

Was the value of simplicity and peace the central message that you wanted to share with readers through Sandi, or was there something else that became more poignant to share?

I wanted to hold a mirror up to our attitudes about the past, especially here in the south. The fallout from the Civil War still exists, in ways, I think people who haven’t grown up there really understand.

Are these attitudes to the past, and the other messages in your story still relevant to readers today, or do you feel they will become stronger with time?

Greed, bitterness, jealousy–these are a part of the human condition. They do not change. I think some of the social issues in the novel, like racial tensions or the development of fragile ecosystems, are very much questions for the future as well as the present.

Even though your work is relevant and will probably stay that way, are there people who you don’t feel would benefit from picking up and reading your novel?

That’s a tough question. When I started this series, I thought of them as “chick” books, but I’ve been surprised at the number of male fans who have told me how much they have enjoyed them. I don’t do a lot of blood and guts, and romance is a more of a side plot in my novels, so for hardcore fans of both, this may not be your book.

It’s great to hear that you’re connecting with both male and female readers. What kinds of comments do you often hear from people who’ve read it?

I always hear that they stayed up until 3 a.m. or cancelled a dinner date to finish it. That’s really gratifying!

If you’re getting people to stay home instead of going out, you know you’ve written something awesome! Looking back, what do you feel that you personally learnt by creating such an awesome book?

Realizing that everything isn’t set in stone. You know, you start out with an idea, you outline all these chapters, and sometimes you get into it and feel something doesn’t ring true. It’s okay to change it. I had a final scene in mind, and halfway through the book, I changed my mind about the killer. I had to remind myself I was allowed–it’s my book.

Have you found that connecting with other writers via writing groups has helped you outline, edit and remind yourself that this is your book?

Yes. I have a critique group that meets twice a month. They were key responsible for encouraging me to finish my first novel. Not so much the criticism, but just having a deadline to write and people who were waiting to read it.

Since you have eager readers in your critique group, I’m guessing that you’re working on a new writing project. What can you share about it?

The third book in the series, The Lies Beneath, launches in July 2019. I’m also working on something totally different– a piece of historical fiction on Helen of Troy.

The third in the series and a jump into historical fiction, that just sounds like so much fun! We’re out of time to get into the nitty-gritty of your new projects, so you’ll have to come back soon and let us know all about them. Until then, Ann, thanks so much for sharing your love of writing with us and I hope to hear more about the success of The Lies We Are soon!

Want to find out more about Ann Eichenmuller? Connect here!