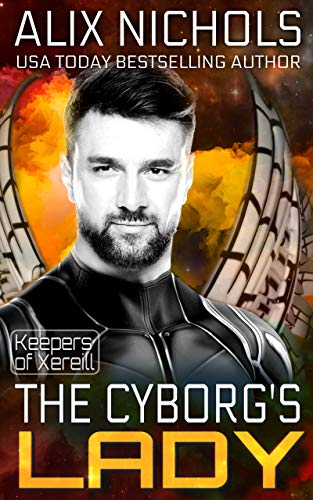 The League of Realms’ top enforcer cyborg Keiron Yaggar can have any woman in the galaxy.

But it’s the foxy stranger the colonel meets on his long-overdue vacation who catches his eye. Linni from Ittroise, as she introduces herself, is taking a week off work, and is on the same Two Planets and a Moon Tour as Keiron.

The young woman fascinates him. Her proud bearing, the way she gazes at the stars, the way she’s not awestruck by his position or stature… Not to mention the nerve she displays when the pair run into some very dangerous people on the deceptively idyllic Tastassi, the second stop on the tour.

Once Keiron returns to work, he’ll look into that planet.

He’ll also look into Linni, because there’s more to this young woman than she lets on. Much more. Somehow, she’s breached his defenses… and made his desire flare after their torrid night of passion.

THE CYBORG’S LADY is a prequel to Keepers of Xereill — a complete paranormal / sci-fi romance series.

? Get THE CYBORG’S LADY now.