Author interview with Dave Holcomb of ‘His World Never Dies: The Evolution of James Bond’ 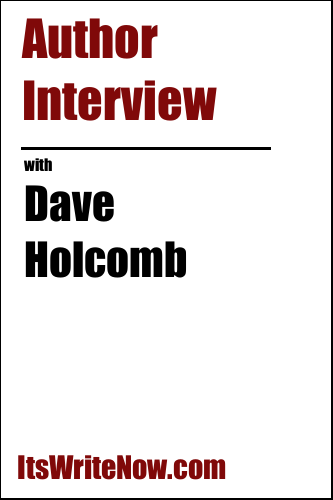 His World Never Dies is an analysis of how the James Bond film series has adapted and evolved to remain relevant, contemporary and popular in the 21st century.

I got the idea last December. I’m a big movie fan — I own more than 250 DVDs, and my fiancée, Shannon, is too, but she isn’t as well versed in older films.

So I began slowly introducing her to the James Bond film series. While I was explaining to her the history of the series, I thought maybe this is something I could share with more than just her.

So I did some research into how to begin a writing career as an author and found Self-Publishing School. I joined and six months later, I had a published book.

Wow, that’s quite the journey!  Was it just the history of the series that you wanted to share with readers through this book, or was there something more than even the keen watchers of Bond might be missing?

I want people walking away from my book with a greater appreciation of the Bond series and its place in film history. A series lasting 57 years and 25 movies is astonishing.

But I also want people to realize the transformation the series had to undergo in order to survive. While I believe we can still enjoy the 1960’s Bond films, it’s important we realize as a society that certain scenes and parts of those movies aren’t and shouldn’t be acceptable today.

The series has realized this and continues to find new ways to be more diverse and accepting of different beliefs.

It really has had an incredible track record.  Do you feel that we might be reaching the end of the Bond world now, or do you think it will keep packing out cinemas in the future?  And do you feel that you work in turn, be just as relevant?

I hope the Bond series continues to adapt and evolve, and ultimately flourish. It seems to have been more under fire in the last couple years. Part of that is just the gap between Spectre and Bond 25.

If it does, the book will remain relevant. For now, it’s a product of its time. It will also need updating following the release of Bond 25 next April.

Plans for a second, or updated edition already, I love that you’re that committed!  How have readers responded to your commitment to your book so far?

Very positivley. I think the most popular response is it’s very easy to read. That wasn’t really my intention, but my writing style is more journalistic because of my background, and for the most part, that means, simpler words and shorter paragraphs.

People have called it “fun” too. It’s James Bond. At the end of the day, it’s not supposed to be taken too, too seriously.

I think ‘fun’ is on the best compliments that you can get!  What do you feel that you’ve learned from the journey to get this book published?

The entire self-publishing process. The writing came relatively easy, but the dealing with editors and their schedules, finding the right book cover, learning what book formatting is. All of that stuff was new to me.

But the help I received was great, and I love the way the book came out.

Having a fantastic end product after all of that work must be incredibly satisfying.  Did you have much experience writing before that made the writing process easier?

I’ve always been interested in English and writing. I would write stories even in elementary and middle school.

I really took an interest in English late in high school and then went to Syracuse for broadcasting. I didn’t go into broadcasting, though, as I learned I loved writing more. I took up a second major, and when I graduated, I looked mostly at sports writing positions.

I learned to write at every step along my journey, starting at Syracuse. But every editor at the numerous places I’ve already worked played a hand in the writer I’ve become.

Earlier you mention Self-Publishing School.  How has that extended your writing beyond what you’d already seen as part of your career?

I joined Self-Publishing School to help me launch “His World Never Dies.” It worked wonderfully.

I would say I came in already with a lot of writing experience. But in terms of setting writing goals, staying on course, and then reaching out to cover designers, formatters and book promoters, they were a tremendous help.

Your book designer did a great job helping you out.  Who designed it?

I worked with Andie Laps at 100 Covers. She was terrific. She was very responsive and made my first experience of working with a cover designer a breeze.

With such a positive experience with this book, has it spurred you forward to write something new?

I’m a freelance sports writer, so I’m always working on some type of story. Right now, I’m writing a really cool feature on the Shoeless Joe Jackson museum in Greenville, South Carolina for Yardbarker.com. I also work on a lot of sports slideshows for them.

At Falcon Maven, I run a team of four people blogging about the Atlanta Falcons. It’s mostly a video platform, but there’s some news writing involved as well.

It might not be until after the fall (football season), but I hope to begin my next book soon. I’m bouncing a few ideas around in my head — both involving James Bond and not. I’m also considering fiction.

I’ve been inspired by the 75th anniversary of D-Day. My grandfather was in WWII, and when I was in middle school, I wrote a short story about his adventures on a motorcycle during the war. I don’t think I finished it, but I might be crazy enough to pick it back up all these years later.

I hope to get something published in the spring or early summer of 2020.

Oh, there are so many good ideas there to choose from I don’t think you can go wrong if you pick any of them.  Dave, thanks so much for sharing your journey through the world of James Bond with us today.  I can’t wait to hear more about your next release in 2020.

Excited to read the book we discussed today? Find it here on Amazon: ‘His World Never Dies: The Evolution of James Bond ( ASIN: B07SJVQWMX )‘.

Want to find out more about Dave Holcomb? Connect here!