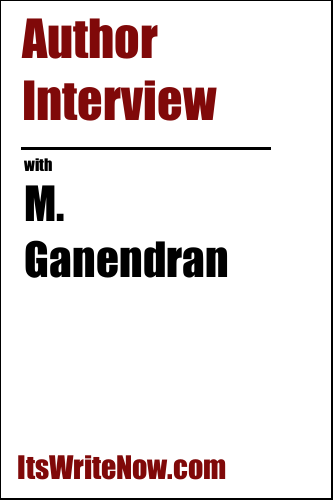 As October of 1900 draws to a close, London’s foggy, lamplit streets are hit by a string of burglaries which puzzle Scotland Yard. When they culminate in a gruesome murder, Sherlock Holmes is called in to investigate. But has he put the wrong man behind bars? In this atmospheric mystery, an Indian Detective seeks answers with the help of his assistant Madeleine Carmichael. With a touch of humour and a great deal of determination, the unconventional duo must use the most modern techniques to unravel the depths of human cunning.

Will an unconventional duo prove Sherlock Holmes wrong?  Return to October 1900 with M. Ganendran and I as we return the world of London past in ‘The Porcelain Cat: A Detective Amarnath Mystery’.  I’m keen to return to London past, so can you set up what inspired you to write this novel M. Ganendran?

This book was a joint project for me and my husband. He’s the one who is really interested in true crime and he was frustrated with the Sherlock Holmes stories, as Holmes always seems to magically come up with the answers using flawed deductive reasoning! So the book came from a desire to challenge Holmes and make him pit his wits against another Detective who uses very modern methods.

Challenging the reasoning of the world-famous Sherlock Holmes is quite the challenge.  What did you learn about and research to make sure that your characters were able to compete with him?

I learnt a lot about the history of fingerprinting and how it works, as well as some grisly information on post mortems and how the time of death would be calculated in those days. Over the years we have also both read a lot about real Victorian crimes, how the newspapers reported them and how people spoke, so the dialogue in the book would be realistic.

What was the most important idea that you wanted to highlight to your readers throughout the course of this realistic return to the past?

We wanted to show that real life officers of the law can’t come to conclusions by sitting in their armchairs and using deductive reasoning alone. They pound the streets for hours, facing danger every day and their sacrifices shouldn’t be forgotten. Also, it’s a message of tolerance and understanding, as our duo is unconventional in the Victorian era; an Indian Detective and his female assistant who sometimes come up against discrimination.

How have readers responded to the duo and the messages they’re sharing?

Our beta readers have really enjoyed the unique story and the vivid characters, as well as the fact that they’ve learnt a bit about crime history. They reported that they were kept guessing up until the end because they didn’t know for sure how the crime could have been committed. The incorporation of Sherlock Holmes, a well known character, together with our crime-fighting duo of an Indian Detective and a woman, has brought something fresh to the genre. We’ve also had some of them ask when the next Amarnath Mystery will be released, so they must have enjoyed it!

Requests for the next books are some of the best reviews you can get!  Can readers expect to see a new Amarnath Mystery soon?

At the moment I’m taking a much needed break after finishing The Porcelain Cat! However I’ve been focusing on short stories and flash fiction recently, and I hope to soon write another Molly Morgan Adventure as a sequel to A Summer of Witches which was released in 2017. By the time I’ve finished that, London will be in desperate need of some more crime-solving, so we’ll definitely be bringing back Detective Amarnath and his assistant Madeleine Carmichael for future adventures.

When I first started writing, I often made the mistake of focusing too much on the story, and not enough on the dialogue and developing the characters. Over time, I’ve gradually been able to bring characters to life more, with improved, realistic speech. I still have lots more to learn and I find this really challenging, particularly for a book like this one which is set in a different time period.

One thing I’ve really liked about your book branding is how you’ve taken your book back to the 1900s through the cover.  Who designed it for you?

We came up with the general idea for how we wanted it to look, then enlisted the services of a fantastic illustrator, Chiara Noemi Monaco, @lenneluce

Chiara’s done a great job taking the reader back in time before they even get to the first page.  I want to return the 1900’s for a taste of the foggy depths of London’s past so we’ll leave out chat here for today, but you’ll have to return to ItsWriteNow.com soon so share a taste of another exciting adventure!

Excited to read the book we discussed today? Find it here on Amazon: ‘The Porcelain Cat: A Detective Amarnath Mystery ( ASIN: B07S3N8YBX )‘.

Want to find out more about M. Ganendran? Connect here!