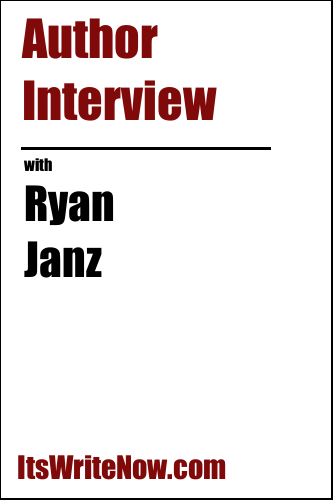 In this dark, anti-noir mystery set in 1958, San Francisco, down and out Private Eye, Joe Nails, dreams of a friends’ suicide, only to discover he vanished weeks before the dreams began. Joe investigates further, before ultimately finding himself staring into the dreadful face of the unimaginable.

What will Joe find as he investigates deeper into the face of the unimaginable? To guide us through the mysteries that lie in 1950’s San Francisco, Ryan Janz the mind behind of ‘Boulevard Dreams’ has donned his investigating hat and taken his magnifying glass in hand to help us on our way. Ryan, let’s start investigating at the beginning. What inspired you to write this book?

I had a dream about a childhood friend, the closest friend I ever had, but one I hadn’t seen for a long time, and so, I decided to look him up – only to discover he had passed away years before. To this day I do not know how. It shook me up considerably, but it got me to thinking of what would happen if someone, like a private eye, dreams of an old friend committing suicide and discovers it may have happened even before the dreams began, and so he investigates. And I also got to thinking about what he might find.

I can see how that would get you into an intense thinking session. Once you started considering this idea in depth, did you find additional elements from your life being peppered into the storyline?

I think all fiction writers draw from their own experiences and I’m no exception, particularly whenever I am writing something emotional.

How did the characters come from the combination of your thoughts, experiences and emotions?

Once the foundation of the story is laid in the opening chapter, each character comes naturally to me to either advance the story or add flavor to it – or hopefully both. And experiencing each new character and situation is what makes writing so much fun.

What did you really hope to communicate to readers from the new characters and situations this book explores?

Despite being knocked down multiple times through tragic loss, it may still be possible to get back on your feet.

Do you think this message is really important for readers today?

Yes, it is very much of any time.

Despite the relevance to the world today, are there people who really shouldn’t read this book?

Anyone under the age of 18, or anyone offended by profanity, or those offended by any depictions of violence (although there is only one particularly graphic scene). Every character is imperfect and behaves accordingly. There is almost zero sexual content, but what there is of it, is extremely minor, or implied.

How have readers responded to the story and its imperfect characters?

The few reviews it has received are on Amazon, but in general, people have told me they love the characters, and they feel the dialogue is realistic and first-rate, and feel it is intelligently written (some complained that it is almost TOO intelligent – but they soon grew accustomed to the style). They also feel the plot becomes very complex, and as they approach the last chapters they really have no idea how it will end. But they do care how it will.

Not everyone can write a tale where readers care about how it will end, so that’s a fantastic testament to your story-crafting skill. What has been the strongest negative and positive feedback that you’ve received from readers that have really stuck with you?

Someone I know who I was certain would love the book said it just didn’t do anything for her; it had zero impact. The worst criticism to me is not hate – but indifference. And that criticism, among a few others, does seem to drown out the compliments in my mind, but I must add I’ve had my share of praise.

Praise is a wonderful thing, but sometimes the best thing is what the author has personally learned turning their work into reality. What have learned?

How I will never be satisfied with the final result – even following publication. I could go on editing until Doomsday, or at least until the day before Doomsday.

*Laughs* Editing can be that way at times. Where did you learn to edit and write?

Were there steps that you’ve taken after grade school to prepare yourself to be the best writer you can be today?

I have never prepared. It’s just something natural I’ve done to one degree or another since the age of 9.

So you’ve never explored joining a writing group to give you ideas about how to improve your work?

No. I would like to, but between writing, re-writing, promoting, eating, sleeping, and going to the bathroom, there is little time.

The end-to-end writing process takes up a huge amount of time, so it really can be hard to connect with other authors. Instead of connecting with other authors, I’d love to hear about how you connect with your ideas as you write. Where do your thoughts tend to go while you’re in the middle of a writing session?

While writing I think a great deal of my mother who told me quite late in her life she had always dreamed of becoming an author. When she told me this, and unbeknownst to her, I had just begun writing my first novel. She died soon afterwards without ever knowing.

I’m sorry to hear that your mother never knew you started your first novel, but I’m sure she would have been pleased and proud. As you look back from that first novel to now, how has your writing style and voice changed?

My first and second novels are unpublished, my third I hope to release in the fall of ’19, and, Boulevard Dreams, is my fourth. So, I don’t think it’s a coincidence that I’m publishing my work in inverse order, because I’ve tried to improve over the years in telling a story in as concise and entertaining a fashion as I am capable at the time.

With four books down I don’t think there’s much doubt now that you’re capable. Are you working on a new project to extend your writing capabilities? And what can you share about it?

It’s a novel set in 1977, about a young aspiring screenwriter who ventures to Hollywood and gets mixed up with the wrong people. It’s essentially a screwy comedy, but with very serious and (I hope) significantly important overtones.

Another return to California of times past! Have you started to think about how you can brand your books to pull them together to make it easier for readers to return to the past with you?

No, I’m afraid it hasn’t crossed my mind.

I’m sure you’ve done more branding than you think. Tell us about your book cover, did you use a service or design it yourself?

I designed it myself but after several days of amateurish attempts on my part to ready it to go live on Amazon, it became evident I needed help, and so I used a service to finalize it, particularly the font of the title and my name.

See, you’ve already taken the first steps into the exciting world of author branding, you’ve already done more than you thought you had! Wow, we’ve chatted about a lot of things. Is there anything we missed chatting about?

No, I think the questions you’ve presented are very well done. They made me reflect.

Well, I always hope to inspire writers to consider and reconsider their writing journey so far, and perhaps even take it on another exiting winding road, so I’m glad to hear that I’ve challenged you to reflect. Ryan, thanks for taking some time to reflect with us today, and I hope we get a chance to reflect again soon.

Want to find out more about Ryan Janz? Connect here!