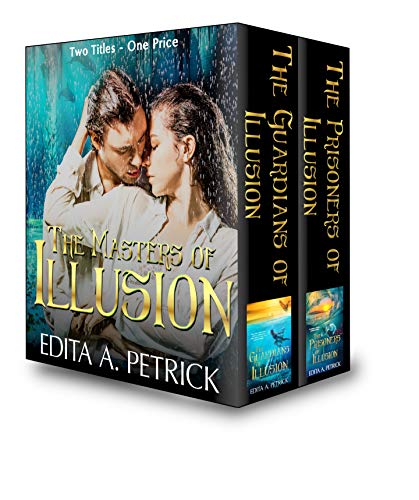 The Guardians of Illusion – Book 1

Ambrosia Severn went to California to go treasure hunting. What she finds defies all logic and reason. What follows will change the course of her destiny.

When gifted young doctor Ambrosia Severn takes a beach vacation to California to go treasure hunting, she is pleasantly surprised to see a naked man walking out of the surf.

Niven, the man whose excellent collection of limbs and musculature Amy clinically evaluated and shrugged, explains calmly that someone is trying to kill her. He is a descendant of star-lords stranded on Earth thousands of years ago, and vows to protect sceptical Amy, and discover who’s trying to kill her—before it’s too late.  Amy has only one question: Why? Niven has none…because he’s watched her secretly for 15 years and needs to deal with a forbidden attraction to the woman he’s bound to keep safe. Especially when the would-be assassin is his betrothed.

The Prisoners of Illusion – Book 2

The danger is far from over. If anything, now Amy stands even more to lose—her children.

Ambrosia Severn is a talented young orthopedic surgeon, and was about to branch off in an exciting new direction in the field of limb replacement, when she made that one fateful mistake—she took a seacoast vacation. The man who had watched her for fifteen years made sure she was dead—but only to the world. Niven is a descendant of Quen star-lords stranded on Earth thousands of years ago. His original mission directive was simple: Protect the beautiful and talented young doctor. He re-wrote the script according to his heart’s desire and today Amy is very much alive among the people whose ancestors came down from the stars.

She is grateful to Niven’s kinfolk for offering her refuge when she most needed it, but she also thinks they’ve been hiding their homeland long enough. Especially now, when Niven’s two sons keep her busy, she doesn’t want them to grow up in the isolation of the elite island society. However, there is a difference between a measured exposure of the Island, and ripping off its cloaking screen. But that’s precisely what Persis, the ruthless siren wants to do—and in the process destroy the world that’s hosted her ancestors.