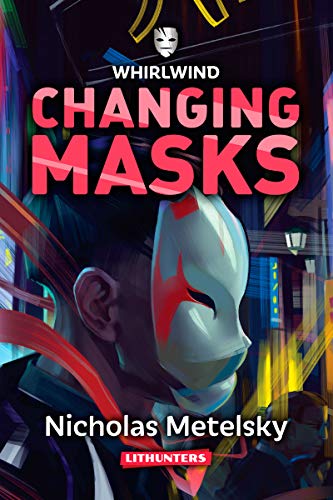 A novel inspired by iconic anime titles likes Neon Genesis Evangelion, Tokyo Ghoul, and Darker than Black.
A badass veteran fighter is transferred into the body of a child in the urban Tokyo of a parallel world, an epicenter of clan wars and a dangerous place where you have to watch your step, your back, and what you say.
Still, he has his mind, his convictions, and the will to fight for power, money, and respect in this new world. He will show everyone what he is made of, and the criminal bosses will know and fear his mask. But the powers that be of this world are not willing to share their thrones with anyone and are prepared to spare no expense to get rid of this threat.

A kid with the experiences, thoughts, and beliefs of an adult mercenary now goes by the name of Shinji. In daylight, he pretends to be an ordinary student in a school full of heirs of powerful clans and tries to figure out his studies and handle teenage relationships. At night, against the backdrop of a Tokyo teeming with shady goings-on, Shinji is a skillful agent with neither weakness nor mercy.

Shinji has to carefully hide his personality under a mask, so as not to endanger his daily life, not yet ready for an open conflict. His road lays through shadows, his steps are silent, and his moves are deadly.

***
Changing Masks is the first book of the sci-fi adventure series Whirlwind by Nicholas Metelsky, a critically acclaimed author. This series is the ultimate adventure of a lifetime, as the readers get to watch Shinji start from the bottom and work his way up to the top. The world Metelsky has created is full of inconceivable and tricky fights, modern magic, mechas, and the sin of human pride. In this explosive mix of science fiction and animesque setting, our hero has to find and conquer his place… hiding his true self behind a mask.