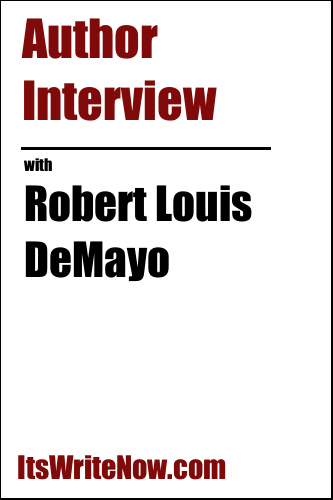 Under the guidance of two rough Maine woodsmen, a frail but strong-willed New Yorker becomes a worthy outdoorsman, an experience which significantly shaped the world view of the man poised to become the 26th President of the United States thirteen years later. Explore Theodore Roosevelt’s youth through the fictionalise account of the true story in ‘The Making of Theodore Roosevelt’.

Have you ever wondered what experiences makes great a man great? Journey through some of the early experiences in Theodore Roosevelt’s life with Robert Louis DeMayo as he introduces to accounts of his early life in ‘The Making of Theodore Roosevelt’. Robert, it’s great to catch up with you again, what have you been doing since we last caught up?

My last novel, The Sirens of Oak Creek, has now won three national awards. It’s due to be launched in November.

What a wonderful lead-up to your November launch! Since November is a little while away I’m glad to see that you’ve dropped into ItsWriteNow.com to chat about your book The Making of Theodore Roosevelt. What’s this book all about?

Six months after young Theodore Roosevelt’s father died he went to northern Maine where he met William Sewall. Over the coming year, Sewall educated Theodore Roosevelt on the rough woods of Maine and the men that worked there. On their jaunts they discovered that his asthma wasn’t bothered by the intense cold, and he began working out and getting stronger. Roosevelt said later that this experience changed his life. He also met the love of his life, Alice Lee, and romanced her between trips to Maine.

Ahh, a chance to learn about the early life of Theodore Roosevelt. What inspired you to write about his this period in his life?

When I was twelve my father took me to northern Maine where he bought a piece of land from a man named Bill Sewall. Sewall’s grandfather had been Theodore Roosevelt’s guide, and while we stood looking over the lot he told us about some of their adventures. As I grew I became interested in the story, and got to know several members of the Sewall family who told me their versions of the history. Over the years I’ve met quite a few people who are descended from William Sewall and the woodsmen who knew young TR. I’ve also explored the same woods as he did, and learned what I could about the old logging days.

Wow, those connections to both the land and people from history are awesome. How did you go about fashioning the characters, fictional and real, that we’ll meet in the book from what you learned?

From the Mainers I know, and the writings left behind by William Sewall and Theodore Roosevelt.

What did you learn once you started digging into this writings and background of these people?

I never knew anything about Roosevelt’s first wife. I know now that she was the love of his life, but after her death in childbirth (which is not covered in this book) he never mentioned her name in public again. In fact, he quit politics and went west because he couldn’t escape her specter which loomed heavily in the eyes of their surviving daughter.

As you look back on all of the threads of history that you pull together in this book, is there one central idea that you hope readers really connect with and take away?

Roosevelt didn’t start as the powerhouse we all know. When he went to Maine at twenty he was weak, asthmatic and depressed, and seriously questioned whether his health would ever allow him to accomplish anything in this lifetime.

The picture of a weak and asthmatic Roosevelt really doesn’t match the picture that most of us have of this man. What feedback has readers shared about meeting this early Roosevelt in the book?

Very positive. The book is dedicated to Cleo Sewall who was my friend. Every year or so I do reading at the local high schools and the Patten Lumberman’s Museum.

Has there been tough criticism that you’ve taken in the development stages to allow the responses from readers to be so positive?

Yes from my editor, who’s been with me for six novels now. She is brilliant and ruthless, sometimes in the same red sentence.

But what a sentence it will once you’ve edited it with her red suggestions. Looking back, where did you learn to write?

On the road, filling out journals. I left home at twenty and completed ten, six-month trips abroad in the next ten years. During this time I filled out thirty journals, and wrote travel articles for two newspapers.

How has that journaling background helped you approach writing?

I write historical fiction, travel fiction and mysteries. Usually I think about a novel for at least a year before sitting down to write.

Thinking about projects for that long before you start writing shows that you’re not only a great writer, but a great thinker. As much as I’d like to plunder your mind for snippets from what you’re working on now, I’m going to encourage readers to keep their eye out for the release of ‘The Sirens of Oak Creek in November’ and of course, picking up a copy of ‘The Making of Theodore Roosevelt’ now. Robert, thanks for sharing a little more of your author journey with us today, and I hope to hear more from you soon!

Excited to read the book we discussed today? Find it here on Amazon: ‘The Making of Theodore Roosevelt ( ASIN: B07KJH6QYN )‘.

Enjoyed learning about Robert’s work?  Before this interview we also chatted with him about his novel The Light Behind Blue Circles.