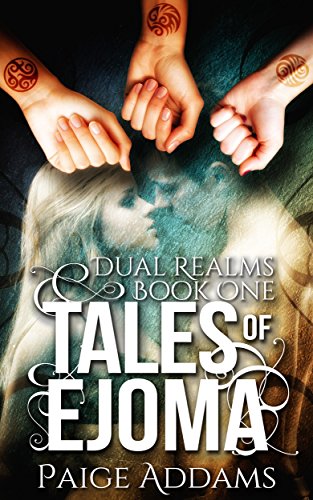 Ejoma and Thavos are immortal and human realms, held separate from one another by a magical barrier. Ejoma is a world of magic, danger, and beauty that humans have long forgotten exists. The shimana can change their shape or bend the elements to their will, and have filled their countless years with learning. Thavos is a world of science and machines. Always striving to invent new things and understand the world around them, humans became strong.

Balance has been maintained between the two realms for millennia, for the safety of immortals and humans alike. But a deadly enemy is growing steadily more powerful with dark magic. Soon, neither realm will be safe.

This series of novellas and short stories will introduce you to:

Shauna, an ordinary human dragged across the barrier, who comes face to face with beings she thought only existed in stories. As confusing and strange as this new world is to her, she can’t help her fascination with Ori, a powerful immortal who manifests wishes and hears the dreams and desires of others. When a rogue group of immortals takes an interest in her accidental jump across the barrier, can Ori protect her?

Rina sees a mysterious man reach out to her in her dreams with such a heartbreaking smile that she can’t help but wish he were real. A commander who leads one of the contingents of warriors in the capital city, she should push him out of her mind and focus on her work, but she can’t forget him. When she’s sent to defend a city under siege by rogue immortals, she hears a familiar name…Isaro. How far is she willing to go for him?

Future ruler or not, Mayun would rather die than be stuck with her protector, Toren, while she trains to master her alternate form. He’s overbearing, annoying, and has made it clear that he thinks she’s unfit to become ruler. So why does he seem so determined to stay by her side? And why can’t she stop fantasizing about him? When the enemy begins targeting her, can Mayun and Toren set aside their issues long enough to escape?

Bonus Materials: Also included are a glossary, a bit of the history of Ejoma, and teaser standalone chapters for future books. For the full glossary and history, and blog exclusive behind the scenes material, please visit paigeaddams.wordpress.com