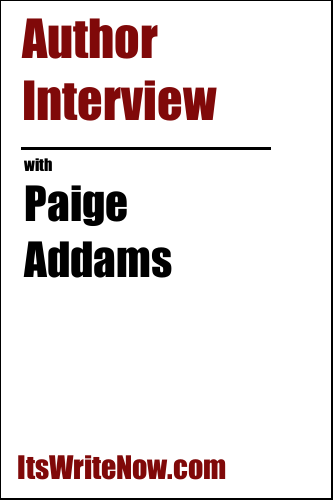 In a realm parallel to our own, where magic lives, immortals rule the land, and a soul-deep love can bind two hearts together forever, a powerful evil is slowly growing in the shadows. With both the human and immortal realms in danger, can light overcome the encroaching darkness?

Magic, power and immortals join together in a realm of light and dark. Are you prepared? To guide us through the first steps into the world, Paige Addams, author of ‘Tales of Ejoma’ has kindly dropped into ItsWriteNow.com to chat about her journey of fantasy writing. Paige, where did the idea for this book come from?

It actually started out based on the world I was building around a particular character I’ve been wanting to write about for decades. The more world building I did – creating the language, getting the political and social structure down, and deciding where the big conflict was going to begin and who needed to be involved – I realized I needed to tell other stories first.

Who is this character, if not one of the heroes in Tales of Ejoma? Well, you may have to wait a few books to know for sure, but you might just get a hint somewhere in this first book… ;)

Oh, I love a good character mystery. I’m very tempted to ask lots of questions for more hints, but I have a feeling we might just uncover the secret, so instead, can you share how you went about building the characters we’ll meet?

During world building for the series, actually. The way I have the shima realm, Ejoma, and the human realm, Thavos, set up is that they are made up of opposing energies and share the same space with each other. Separated by a magical barrier, if they ever touch, both realms would be destroyed.

The three short stories in Tales of Ejoma are meant to introduce readers to the world, magic, aspects (what shimana would consider races), and the growing threat to both realms. I gave my main characters professions that lent themselves to that.

Are any of the elements of these characters drawn from your own life?

Only my love of everything paranormal romance and my desire for escapism. :)

What did you learn about writing a book by taking your ideas, your love of paranormal romance and desire for escapism and putting it all together?

I need to manage my time better! I am an expert level procrastinator, and I can totally justify to myself why I need to play video games or watch Netflix instead of battling my way through writer’s block.

Also, I abuse commas. I either forget they exist or run amuck and sprinkle them around like confetti. My poor, long-suffering editor is amazing, by the way. :)

*Laughs* So many people out there abuse commas, I think they’re just easy targets in the grammar world! Aside from your predilection to comma abuse, where did you learn to write?

From reading mainly, and seeing movies that inspired me. I loved getting lost in the worlds I would read about, and pretty soon wanted to create my own.

Lol, I started out in elementary school, folding a handful of white paper in half and stapling them at the fold to make a book. When the Buffy the Vampire Slayer movie came out, I was a huge fan. So I would fill my books with drawings of a family of vampire slayers. Technically, that was my first series (which will never see the light of day). ;)

Never say never. With a little rework it may turn into quite the tale! What do you think about as you write?

What I call my plot tree. I try to keep in mind my end game for the Dual Realms series, and what all the characters need to be doing to prepare for that. Each story will have different main characters – many of which will have been secondary characters earlier in the series somewhere – but they all play an important role.

In fact, books two, three, and four all take place in roughly the same time frame after the events of book one.

How has your voice as an author changed as you’ve kept writing and using the plot tree to keep track of your end destinations?

Lol, I abuse commas less. I also learned that I have a bad habit of passive writing that I need to work on. I hope with each book that I learn new things and my writing improves. :)

What criticism and compliments have you received on your comma-refined work?

The toughest criticism I received was given by my editor, Debra Hartman and her team at The Pro Book Editor, which is why I always want to work with her for every book. She told me one of my characters was flat. Not good for a main character, lol. But she was totally right. I was so focused on telling the story that I skimped on that particular character. It may sting, but it’s invaluable having someone to give my writing some tough love during editing.

The best compliment was when someone asked me about one of those characters at the end of the book that has a standalone chapter. They wanted to see if that particular character’s story was next. That really meant a lot to me because I want readers to get drawn into the world and characters, and look forward to the next adventure with me.

What can you tell us about the next adventure?

I’m currently working on plotting for book three in the Dual Realms series, still untitled at the moment. It’s tricky, because I have to pay close attention to the timeline of events in book two, The Blood Curse, and plan ahead for what will happen in book four.

While you won’t meet the hero of book three in Tales of Ejoma, you can meet him as a secondary character in The Blood Curse when it comes out on August 31st. :)

Hopefully if we’re lucky we might even see him on a book cover for The Blood Curse! But before we see that cover, let’s enjoy the cover of ‘Tales of Ejoma’. Who created it for you?

Lol, I am hopeless with technology and programs. I manage not to blow anything up, but making my own cover is far beyond me. I am very thankful to have been directed to him by my editor.

*Laughs* It’s great to know when to get the professionals in, and I think you’ve done the right thing but getting Glendon to do this cover. It’s awesome! Paige, after this enthusiastic chat today, I’m keen to return to your work of magic and mystery so I’m going to leave you here today to pick up my own copy of ‘Tales of Ejoma’ and meander through the pages again. Thanks so much for chatting, and come and tell us about the next instalment soon!

Excited to read the book we discussed today? Find it here on Amazon: ‘Tales of Ejoma ( ASIN: B06ZZ66C1C )‘.

Want to find out more about Paige Addams? Connect here!