The Hood Game: Shadow of the Brazen Head 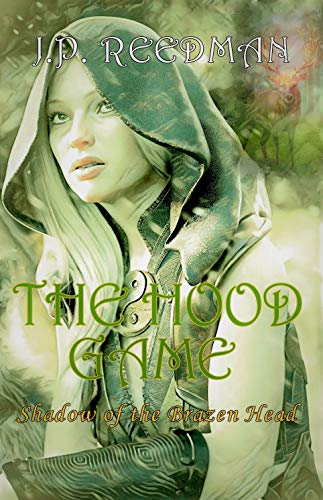 Robin of Locksley, Lord of the Hood, continues his mission to help the people of Sherwood against the oppression of the Sheriff of Nottingham, even though his wife Marian, wounded in body and soul, has left him for the safety of Kirklees Priory. Mourning her loss, Robin has become hard and embittered—the Summer Lord has turned into a Winter King.
At the Merlin Stone, deep in Sherwood, San Tan the guardian fire speaks of one who is coming, who will shake the foundations of the young outlaw’s life. Change arrives in the form of Clarimonde, Queen of the Shepherdesses, a mysterious girl who begs the Wolfsheads to aid the people of North Yorkshire against pirates sent by the exiled Prince John.
Robyn regains some of his old fire when he aids Clarimonde—but when she seeks to join the outlaw band he refuses and they part in anger. Clarimonde heads south on her own, leaving Robyn and his men to face a new, sinister threat from Eustais de Lisle, Sheriff of Nottingham.
Seeking revenge, de Lisle has contacted a necromancer to help him defeat Robyn o’ the Wood. The sorcerer is given a corpse, a special corpse, to weave his dark magic—and from it he crafts the terrible Brazen Head.
The Head can only speak the truth. The Head can Prophecy.
The Head can track down the Greenwood King—even to London, where Robyn joins the doomed rebellion of the demagogue known to history as William Longbeard.