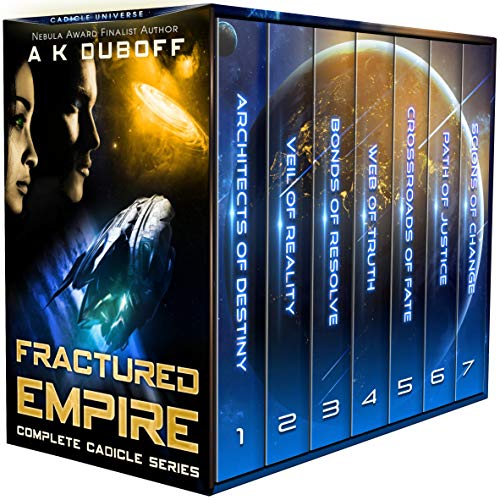 The Taran Empire is fighting a secret interdimensional war… and they’re losing.

Cris Sietinen joins the Tararian Selective Service to hone his latent telekinetic abilities, but being an Agent puts him at the center of a galactic conspiracy.

The Empire is waging a generations-long war within a hidden dimensional rift against the Bakzen, a mysterious race skilled in advanced telekinesis. The only hope for victory is the prophesied Cadicle—foretold to have powerful abilities unlike any other. But the governing Priesthood has its own secret agenda.

With the future of their people at stake, Cris and his family must face the ultimate questions of duty and morality to save their civilization from certain destruction.

A timeless space opera epic with adventure, coming-of-age, romance, and intrigue, the Cadicle series spans three generations as one family challenges destiny to win a war where enemies are not always who they seem.

Print editions are available for the individual books: amazon.com/gp/product/B079P64Z5R