Playing the Piano for the Rest of Us…: How to Play Chord Music on the Piano 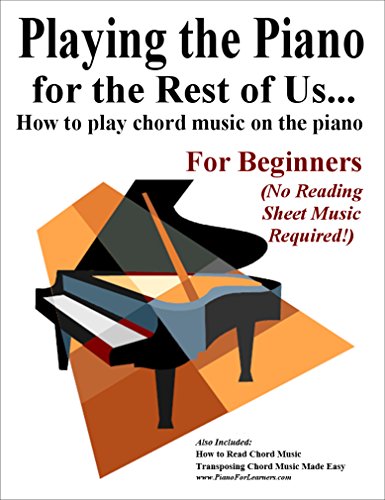 “Playing the Piano for the rest of us” is a course created for people who want to play the piano without having to commit to years of study and practice before being able to play songs they really want to.

Finally a piano course for people who want to play with other musicians without having to learn to read sheet music, to enjoy themselves or be included in groups, like church groups or bands, or just friends and family.

Most of the piano instruction I have seen falls into two categories… it’s too hard, so you quit, or, it doesn’t teach enough foundational skills and knowledge so the only thing learned is how to play songs that the course taught.

Many existing courses teach too much at once like classical piano finger-skills, music theory and how to read sheet music. Students often get lost and discouraged somewhere between reading sheet music and having too hard of a time getting their hands to work together, others teach a set of playing skills that allow the student to play a limited amount of songs or music, but no freedom to find and play what the student really wanted to in the first place.

Classical training is fantastic, but can often times be overkill for people who want to accompany others or want to play and / or sing using chord music. Ultimately the student gets rolled over from too much and too hard of a learning curve, like a wave that came crashing down on their hopes and dreams.

Some training methods don’t provide enough foundation to enable the student to continue growing themselves, at their own pace, as they desire after they’ve completed the course. This course hopes to open the door for people to play the piano and then release them to grow-on!

Learning to read chord music is the difference between a person having to “learn, read and interpret an extremely complicated map with a key of over 20 symbols”, compared to having to read a simple map of “start point, landmark, end point”.