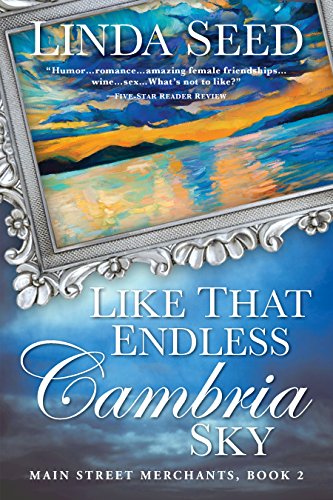 A ruined reputation. A second chance. A conflict between love and ambition.

Genevieve Porter was forced to flee the art world of Manhattan after she blew the whistle on the shady practices of a powerful dealer. Now she owns a small gallery in the scenic beach town of Cambria, California. For Gen, this is a place to regroup; she’s poised to restore her name in the art world and return to New York in triumph.

When she meets Ryan Delaney, a cattle rancher who’s more than he appears to be, she’s ready for a sexy roll in the hay—literally. But as her feelings for him become more than casual, she realizes that his roots on the Central Coast go back generations, and it’s going to be a challenge to lure him away from his family’s land.

If they’re going to make a life together, one of them will have to give up old ideas, old goals—old feelings about what success means, and what makes a place a true home.

LIKE THAT ENDLESS CAMBRIA SKY is the second book in the Main Street Merchants series by Linda Seed. Read the series readers have called “funny,” “delightful,” and “captivating.”