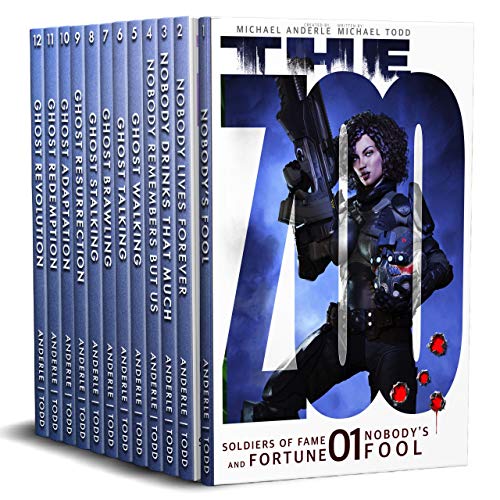 FOOLS DIE IN THE ZOO. THEY DIE FAST AND HORRIBLY.
Born from the fertile imagination of bestselling author Michael Anderle

Read the entire series in the bestselling Soldiers of Fame and Fortune series at a discounted bundle price!

Decades ago, an alien ship fired a missile at Earth as they passed by, and we caught it. That was when humanity truly opened Pandora’s box.

One more trip into danger, or something beyond danger?

Holly Smith has been hired as a consultant to go into the ZOO and retrieve information to help a company find a unique chemical.

Holly is not a stranger to danger when trying to uncover that next billion-dollar ingredient, but even Holly has to admit something is wrong with the vibe coming from the ZOO.

There should not be a lush jungle in the middle of the Sahara.

Needing more information, she leaves the American security enclave and heads to the French/Israeli/India military encampment where mercenaries are known to congregate.

Plenty of alcohol should get her the answers she needs, right?

The more she learns, the more her concern intensifies. Can she learn if there is real danger, or are they lying?

Holly has found FU*BAR in the French encampment and she hopes to learn more about the ZOO from those who have been there.

Will she get the truth, or will she make decisions on tall tales?

JB is looking for someone special, someone to help him in the future. He might have found that person in Holly.

Will each of them find the answers they need?

Holly is back, learning about another story ripped out of the ZOO.

Can she learn enough about the ZOO before those back in America push her to make a decision?

Plus 10 more stories in the ZOO! This entire series boxed set will have you laughing so hard you just might pee your pants, or so frightened you’ll never look at plants the same way again!

The future is looking interesting and humorous, except for the dying part.

Go up and click on the ‘Read Now’ button and enter the ZOO.