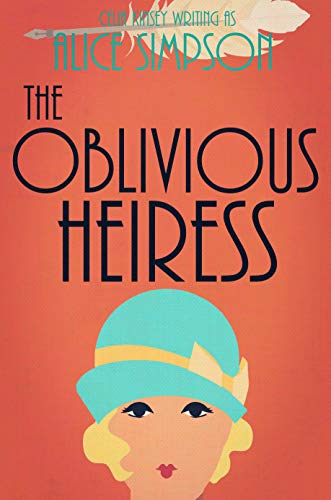 A QUIRKY HISTORICAL COZY WITH A STRONG FEMALE PROTAGONIST

Jane has her hands full getting out the inaugural issue of her very own Carter’s All-Story Weekly Magazine, but she still finds time to investigate the activities of a cagey heiress, an attempted murder, and a band of sailors with mysterious matching tattoos.

This charming historical cozy mystery series is set in the fictional American city of Greenville during the 1920s and features Jane Carter, a young widow who returns home to live with her father after the tragic death of her journalist husband.

Jane’s father owns a local newspaper and wants Jane to take it over someday, but Jane is adamant that she has no desire to be a reporter. Instead, she turns her talent for writing to concocting melodramatic romances for fly-by-night rags who almost never pay on time.

Jane claims that she’s holding out for a millionaire before she marries again, but the only man who makes her heart beat faster is Jack, a reporter on her father’s staff. Not only has Jane vowed she will never be a newspaperman herself, she’s doubly insistent on never again marrying one.

While trying to turn out enough column inches of overwrought romantic bilge to keep her old car on the road, and herself in shoes, Jane runs into the most extraordinary circumstances. In Jane’s madcap world, it’s a constant round of kidnappings, curses, stolen jewels, counterfeit paintings, and hidden stashes of gold. There’s plenty of crime to go around, but nary a murder.

Accompanying Jane on her adventures is her best friend, Florence. Jane and Flo may get into one perilous situation after another, but they are never damsels in distress, because, as Jane puts it, “A real lady always carries her own pocket knife.”

All this getting into harm’s way alarms her father’s housekeeper, Mrs. Timms. Mrs. Timms believes it’s her mission in life to turn motherless Jane into a proper lady, but seeing as Jane has just turned twenty-four, Mrs. Timms considerable efforts appear to have been in vain. However, the housekeeper won’t give up trying, just as Jane won’t give up on seeing Mrs. Timms and her father center-aisling it to the altar and saying, “I do.”

This series is adapted from Mildrid Wirt’s Penny Parker mysteries, which have fallen out of copyright. The author has made extensive alterations and additions to both the characters and plots of the original novels, but readers familiar with Ms. Wirt’s stories will notice many similarities.

These are murderless mysteries. Despite a constant crime wave, there seem to be no murders in the city of Greenville. There may be plenty of peril in the form of kidnappings, heists, and the occasional assault, but nobody ever dies, and justice is always served.