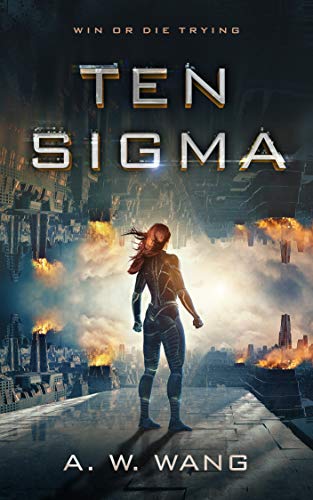 From the Amazon reviewers: …a mix of “Ender’s Game” meets “The Hunger Games”…Thought-provoking, well-written speculative science fiction…The first comparison I will allude to is Old Man’s War by John Scalzi. But Ten Sigma goes where Scalzi feared to tread…

During the twilight of America, Mary, a married stay-at-home bookworm, is dying of incurable cancer.
One wintry night, a mysterious scientist visits. He offers to nullify her enormous medical bills in exchange for transferring her consciousness into a virtual environment as part of a secret military program called Ten Sigma.
A year later, weighed by the imminent bankruptcy of her husband and family, Mary reluctantly accepts knowing she’ll return as a super-soldier in a new, healthy body upon passing certain tests.

After her mind downloads, the shadowy tinkerers of her new reality erase her name and shred her essence. What’s left gets reassembled with every type of martial knowledge and combat experience.
Trapped on the road to becoming a perfect killer, she learns of the program’s true nature.

Everyone is a dead man walking.

Despite the unimaginable odds, she grimly embarks on the impossible journey to return to her family or die trying…

***Mature Audiences Only***
This novel contains graphic violence and some sex.