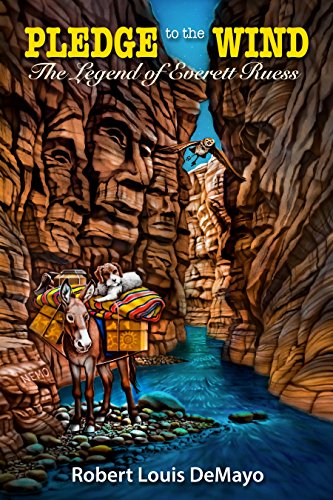 Eighty years ago a young man disappeared in the Utah wilderness. A large manhunt followed, but all they turned up was his last camp and a couple burros. Pledge to the Wind, the Legend of Everett Ruess follows the adventures of Everett Ruess from his appearance in the southwest in 1931 when he was only seventeen, until his disappearance in 1934, shortly before he turned 21. Theories abound as to what may have happened to him: drowned crossing the Colorado River, bit by a rattlesnake, fell off a cliff while trying to reach a ruin, killed by an Indian who thought he was a witch, shot by a rancher, etc. There are others that believe he didn’t die at all, and that the Navajo or the Hopi are hiding him out. In this compelling narrative, Robert Louis DeMayo explores what might have happened.