Nature’s Confession: The epic tale of two teens in a fight to save a warming planet, the universe…and their love 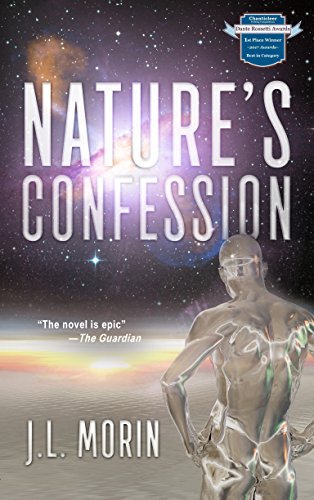 The epic tale of two teens in a fight to save a warming planet…the universe…and their love. A cli-fi quest to outsmart polluters, full of romance, honour and adventure.   “Honestly, it’s not my fault.  Humans were polluting the planet to desolation.  What else could I do?  I had to save her. ”
When a smart-mouthed, mixed-race teen wonders why the work that needs to be done pays nothing compared to the busywork glorified on holovision news, the search for answers takes him on the wildest journey of anyone’s lifetime. With the girl of his dreams, he inadvertently invents living computers. Just as the human race allows corporations to pollute Earth into total desolation, institute martial law and enslave humanity, the two teens set out to save civilization. Can they thwart polluters of Earth and other fertile planets? The heroes come into their own in different kinds of relationships in this diverse, multi-cultural romance. Along the way, they enlist the help of female droid Any Gynoid, who uncovers cutting-edge scientific mysteries. Their quest takes them through the Big Bang and back. Will Starliament tear them from the project and unleash ‘intelligent’ life’s habitual pollution, or will youth lead the way to a new way of coexisting with Nature?
Nature’s Confession couldn’t be more timely, just as the IMF reveals that governments spend $5.3 trillion on fossil fuel subsidies every year, after COP 21 climate decisions in Paris, and the largest climate change march in world history when world leaders converged for an emergency UN Climate Summit in New York City. With illustrations and topics for discussion at the back of the book, JL Morin entertains questions about busywork; economic incentives to pollute; sustainable energy; exploitation; cyborgs; the sanctity of Nature; and many kinds of relationships in this diverse, multi-cultural romance.  1st Place Winner, Dante Rossetti Awards 2017Readers’ Favorite Award WinnerBook Excellence FinalistA Top 10  Best Science Fiction bookBest Climate and Environmental Fiction Book LitPick Award winnerIncluded in “12 Works of Climate Fiction Everyone Should Read”
‘Top Fiction Read’ of the YearNew York Book Festival Honorable Mention
An excerpt received an Eco-Fiction Story Contest Honorable Mention