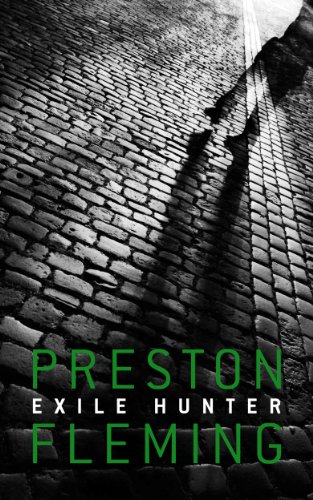 “Pure energy in print form, whether the characters are being pursued or simply talking; Fleming has proven himself a craftsman.” KIRKUS REVIEWS

“As with all of Preston Fleming’s previous books, EXILE HUNTER weaves together the harsh realities of personal betrayal, physical torment, emotional pain, and a spiritual quest with astute intelligence.” BOOKPLEASURES.COM

EXILE HUNTER, the third book in the Kamas Trilogy, begins in 2023, one year before the Kamas revolt, in a dystopian America ruled by a tyrannical President-for-Life who turns America’s military and intelligence assets against his domestic enemies. The protagonist, an undercover officer specializing in targeting exiled political opponents, becomes the scapegoat for a failed operation and is sent to die in a corrective labor camp near the Arctic Circle. But, defying all odds, he survives, escapes and devotes his remaining energies to finding and aiding a woman whose family he has ruined.

SYNOPSIS:
Beirut, 2023: When undercover intelligence officer Warren Linder agrees to lure an exiled opponent of the President-for-Life back to impoverished, low-tech, post-Civil War II America, Linder is unaware that the target is his childhood sweetheart’s father. On learning this, he ignores his better instincts and plunges ahead. But a surprise encounter with the woman who rejected him years before triggers a change in Linder that derails the operation. His bosses, suspecting treachery, capture Linder along with the target and his daughter and spirit them back to the U.S. aboard a secret rendition flight. Linder’s ensuing journey takes him from Beirut to a Virginia interrogation center and on to an Arctic labor camp; then, after a nearly impossible winter escape, on a 2000-mile trek to the Utah Security Zone, where his onetime love was last held. Though he finds her, their respective ordeals have changed them. The story reaches a climax in the couple’s home town of Cleveland, where Linder aims to recover his former target’s last cache of rebel funds and use it to take his loved ones beyond the regime’s reach. EXILE HUNTER is a tragic yet life-affirming saga of a man who risks everything to set right past wrongs, regain lost love and resist the tyranny he once served.

In EXILE HUNTER, author Preston Fleming offers his most richly imagined vision yet of the future American dystopia introduced in FORTY DAYS AT KAMAS, while endowing the story’s characters with complexity and a remarkable capacity for growth. Warren Linder’s epic journey crackles with excitement at every step and leads to a deeply satisfying conclusion. Devoted Fleming readers will likely consider EXILE HUNTER the author’s best work by far.