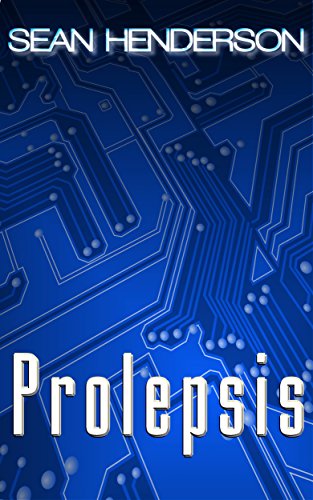 Oren Lockwood is a rising star at Divine Providence Incorporated, one of a handful of global supercorporations that tyrannise an overheated and downsized post fossil-fuel world.

He is employed to spy on Divine’s rivals and engaged to marry the daughter of their fiercely ambitious CEO. This is the man behind the game-changing Prolepsis engine: software capable of building predictive extrapolations of the world, populated by AI copies of its digitally over-sharing inhabitants.

Oren’s callous Manhattan City friends envy his lifestyle and prospects. They desperately strive for similar advancement, but live in perpetual fear of being offboarded to live – or more likely die – amongst the ‘Tumbleweeds’ as the elite class refer to those replaced by androidisation or otherwise deemed surplus to the supercorporations’ ever-changing needs.

In a violent and precarious world Oren seems to be on a fixed path to a bright future, if someone can only convince him he wants it.

But when his obsession with a mysterious AI woman leads him into immense danger, Oren will have to decide if she is his nemesis or everything that is missing from his life.

Sean Henderson’s latest is a fast-paced speculative fiction thriller set in a dark dystopian near-future with shades of Philip K Dick, William Gibson, George Orwell’s 1984 and so much more…