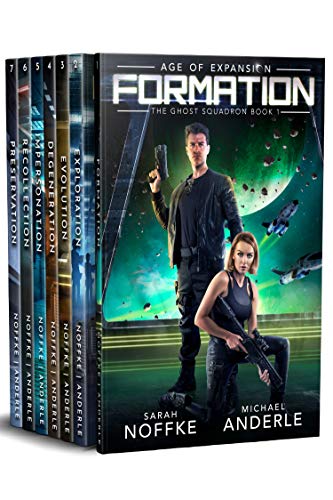 Evolution: After striking a serious blow to the Brotherhood, Eddie and Julianna have learned the name of their enemy: Felix Castile. He is a man of fortune, power, and madness, and his revenge is coming. Castile won’t be deterred so easily. His armory is already restocked and his resolve to take General Reynolds down reinforced. However, this evil mastermind makes a big mistake when he allows Knox Gunnerson to escape.

Impersonation: Eddie and Julianna are perplexed when a major thief strikes a security corporation. They track down the thieves at a top-secret Federation facility. What they learn, only creates more problems.

Recollection: Knox is feeling the pressure to remember where he hid the Tangle Thief. The Saverus are also hunting for the device.

Preservation: While Ghost Squadron follows leads to find the Saverus, these shapeshifters are using their powers to repair the Tangle Thief.