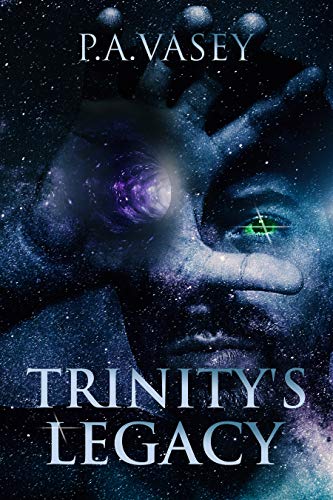 We are not alone

TRINITY’S LEGACY is the first in a trilogy which takes readers on a thrilling road trip full of high tech, drama and twists as humanity encounters an alien species for the first time. It is an official semi-finalist for the 2018 CYGNUS Book Awards for Science Fiction. The sequel, TRINITY’S FALL will be released later this year, with TRINITY: EXTINCTION planned for 2020.

The Vu-Hak: An ancient and malevolent alien race, once organic, now entities of pure thought, drifting between the stars, limitless and immortal. An alpha species. A species that colonises on a galactic-scale.

The portal: A rift in space connecting Earth to the Vu-Hak galaxy. A result of the Cold War’s secret nuclear arms race. Hidden by scientists and U.S. governments for half a century. Forgotten.

Kate Morgan: A doctor grieving the recent death of her child. She encounters a strange man in her emergency room. A man who speaks to her telepathically. A man who knows things about her he could not possibly know.

Adam Benedict: Amnesic, enigmatic, and not entirely human. The FBI and the Government are desperate to capture him. Driven by urges he cannot understand, he goes on the run, taking Kate Morgan with him.

With Adam questioning whether humanity is worth saving, Kate realizes that she is the only thing keeping him human. And time is running out.

Click on the BUY NOW button to get your copy today!