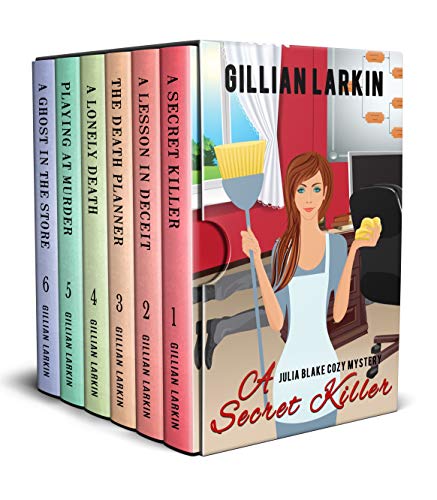 Julia Blake runs a cleaning business. She also has the uncanny knack of discovering murdered people.
In this story Julia visits one of her clients, a genealogist called Hugo Barnes. Hugo has uncovered a family secret during the course of his work. He tells Julia that the client won’t be happy about the secret he’s discovered.
Julia finds Hugo’s dead body the next day. She makes her own investigations into Hugo’s death and soon discovers that his assistant, Dinah, and his brother, Gilbert, have strong motives for killing him.
Julia also finds out who the last client of Hugo’s was. Did they have a motive to kill Hugo too?
And who is the man who’s been watching Julia’s house?

A Lesson In Deceit – A Julia Blake Short Cozy Mystery

In this story, Julia travels to Edinburgh University to visit her son, Sam. It’s not long before she stumbles upon a dead body. Julia is happy to leave the murder investigation to the police – until her son becomes one of their suspects. Julia has no option but to get herself involved, despite the danger she puts herself in.

Grace Abrahams helps ghosts – particularly those who were murdered. She meets the ghosts at storage locker auctions.
Grace meets Jenny Lorrimer. Jenny was strangled by the lead of her headset. Grace finds out that Jenny was an events planner and she was murdered at a wedding that she’d organised. Grace delves further and discovers two suspects – Jenny’s sister and Jenny’s best friend. A shock discovery leads her down a different route.

A Lonely Death – A Pearl And Derek Mystery

Derek Quill is an elderly gent who can see the ghosts of murdered people. With the help of his ghostly friend, Pearl, he finds out who killed them.
In his first investigation, Derek meets the ghost of Eric Malone. Derek knows Eric from his schooldays. Eric bullied Derek mercilessly back then and now he’s asking for Derek’s help. Derek soon discovers that Eric never changed his bullying ways and there is more than one person who could be a suspect.

Playing At Murder – A Butterworth Mystery

A short murder mystery story
It’s always been a dream of Connie Butterworth’s to be a private investigator. Now that she’s retired, she makes that dream a reality and sets herself up as an investigator.
With reluctant help from her sister-in-law, Sable, Connie takes on her first client.
What starts out as a simple case of tracking down a missing person soon turns into an intriguing case of deception, phone hacking and murder.

A Ghost In The Store – A Ruby And Nessa Mystery

A short ghost story.
Ruby Laurel is a ghost hunter. She locates ghosts who are haunting places – or people.
In this first story, Ruby is called upon to investigate a haunting in a supermarket. She soon discovers the ghost of a young woman called Mary Jackson. How is Mary connected to the supermarket? And why is she haunting it?
Ruby’s investigation is made more difficult by the arrival of her troublesome younger sister, Nessa. Will Nessa help, or hinder, the investigation?
?