Is happiness a universal concept? People, who had survived the near apocalyptic experience, seem to believe that it is.

What if life after a disastrous event that almost shuttered the world into pieces would not be doomed to dim, grey picture we are used to believe it would? What if people learn from their mistakes and decide to build a whole new world full of pleasure, easiness and happiness for all?

Tauria, aged 32, lives in such a world. It is designed to make everyone feel happy every minute of their lives. Work brings satisfaction, hobbies are encouraged, relationships are supposed to bring out only positive emotions. Does it matter that things that do not fit into the general happy pattern get discarded and disappear? Things like friendship and commitment. Things like true love. Is it enough with lightness and never-ending joy?

The apocalyptic event that had changed the world forever, had done more than that. There are two worlds now, forced to exist side by side. Can they find a way to live together?

One meeting, insignificant in itself, as all meetings of two people are, promises huge changes. Is the world – the worlds – ready to accept them?

The Chinese proverb says: “When the winds of change blow, some people build walls and others build windmills.” What will the people of two worlds, so utterly different and at the same time so similar, choose? 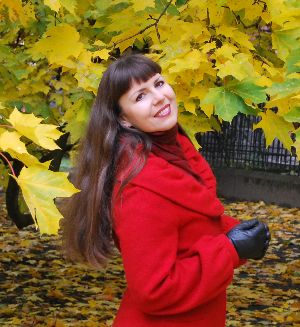 Eve Koguce lives in two beautiful cities on the coast of the Baltic Sea – Riga, with its narrow, cobbled streets of medieval Old Town and splendidly detailed art-nouveau architecture, and Jurmala, with its endless sandy beach embraced by pine forest.

Eve’s home country Latvia is ranked the second greenest country in Europe, outrun only by neighbouring Sweden, and Eve believes that creativity of the locals is a direct result of love and respect for nature they have had for centuries.

Eve’s debut novel, NEGLECTED MERGE, is, at the same time, a tale and a story, in which an allegory mixes with reality, allowing every reader to see its characters and plotlines from different perspectives.