The year is 2006, a week before Christmas, and the worst storm in twenty years is about to descend up Maidstone.

Mrs. Francesca Dobbs is thirty-three years old, a dinner lady, and a regular churchgoer. Ten years earlier, to escape her father, an overbearing and controlling Lutheran Pastor, she agreed to marry Mr. Edward Dobbs. A dull, lumbering, and pious fellow. A rushed union proves to be just that – rushed. And Fran finds herself trapped behind walls of her own making. Still, she accepts her fate with stoicism and sinks into a life of grey domesticity. Her only buffer to the monotony of her existence are her weekly visits to a lavish tearoom ensconced in a luxurious Hotel. And for two hours, she is no longer Mrs. Edward Dobbs, but a bright young thing on a grand liner exploring the globe. At home, she treats her sexual deprivation with an endless stream of pseudo erotic novels set in a bygone era.

This is all about to change…

After the school staff Christmas party, the storm hits, and Fran huddles under a tree awaiting a bus. It doesn’t come. A Good Samaritan arrives, Peter Pearson, head of the English department. Though he turns out to be not so good. Peter is a sex addict. The previous evening, he had collected a six- month sobriety chip from a meeting of Sex Addicts Anonymous. However, the day of the storm conspires against him, and he is blown into Fran’s path. Will it be possible for them to chart a course back to tranquil waters? The odds are stacked against them. 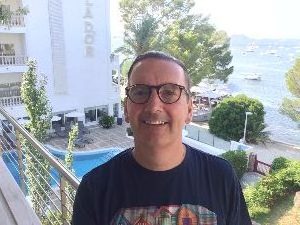