The adventure of a young Parisian artist and his dog. A novel of action and reflection; of fidelity and trust; of resilience, love, and the power of art. Jeremy’s mother is about to go to prison for their debt to the State. He is trying everything within his means to save her, but his options are running out fast. Then Jeremy discovers a treasure under Paris. This discovery may save his mother, but it doesn’t come for free. And he has to ride over several obstacles for his plan to work. Meanwhile, something else is limiting his time…

About the author:
Indrajit lives in Paris with his family. He is also the author of two collections of short stories, ‘The Sacrifice’ and ‘The Eye Opener,’ and of a nonfiction ‘The Seeker of Well-Being.’ 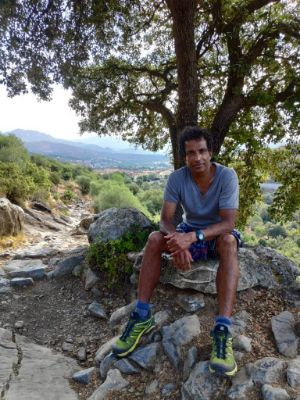 Indrajit Garai, an American citizen now, was born in India in 1965. After his Bachelors degree from Indian Institute of Technology and Masters from Harvard, he worked as a corporate strategy consultant and as an investment banker in America, Spain, and England, while studying parallelly Ayurveda (ancient medicine of India) for stress management. In 2001, after the birth of his daughter, he moved to Paris, opened his private practice of stress management, and then authored six books in this field (five in French and one in English).

Authoring these books on stress management gave him a deep love for writing. Since 2015, he has devoted himself full-time to creating literature.